A British Officer is shot dead on a remote hillside south of Dublin.

Former police detective, Jayne Sinclair, now working as a genealogical investigator, receives a phone call from an adopted American billionaire asking her to discover the identity of his real father.

How are the two events linked?

Jayne Sinclair has only three clues to help her: a photocopied birth certificate, a stolen book and an old photograph. And it soon becomes apparent somebody else is on the trail of the mystery. A killer who will stop at nothing to prevent Jayne discovering the secret hidden in the past.

The Irish Inheritance takes us through the Easter Rising of 1916 and the Irish War of Independence, combining a search for the truth of the past with all the tension of a modern-day thriller.

It is the first in a series of novels featuring Jayne Sinclair, genealogical detective.

I’m a keen lover of thrillers/mysteries, though these day’s I don’t get to read them as often as I would like to, so when I was asked if I would like to participate in the blog tour for this book, I eagerly agreed.

Even though I have read numerous thriller/mystery books, this is the first Genealogical mystery book that I have read. Being a keen genealogist myself, and having been researching my descendants for the last 8 years. I found this book really interesting, especially as part of it is also set in my home city of Manchester.

Jayne Sinclair, ex-police detective is asked to take on the case of finding the true parentage of a dying billionaire. The only clues to his father is a book, a photograph and the name on his birth certificate. However, the man named as his father couldn’t have been, as he died several years before his son would have been born.

Intrigued by the mystery, Jayne agrees to take on the case and tells the billionaire he will have his answer within 8 days. The case has Jayne following her leads over to Ireland. This is where things take a decidedly bad turn for her, as it would seem that someone doesn’t want her to discover the truth, and is out to stop her from ever finding it.

Jayne is a bit of a hot and cold character. She has a very tough, matter of fact personality, which can make her seem unlikable at times. Once she is on the case, she becomes a determined woman who is exceptionally good at her job. You can see why the billionaire chose her.

The story takes us back in time as well as being set in the present, back to Ireland before the billionaire was born, back when the Irish rebels were fighting to end British rule. These historical chapters are what makes the book for me. They are often intense and informative, but not in a manner which will make you feel overwhelmed.

As all good mysteries should, the book has you gripped, heart-racing and on edge at times. There are numerous secondary plots being interwoven with the first that gives the book that added suspense factor.

The Irish Inheritance has a fantastic plot with many twist and turns right up to the very last page, and thoroughly enjoyable.

Martin has spent most of his adult life writing in one form or another. As a University researcher in history, he wrote pages of notes on reams of obscure topics. As a social worker with Vietnamese refugees, he wrote memoranda. And, as the creative director of an advertising agency, he has written print and press ads, tv commercials, short films and innumerable backs of cornflake packets and hotel websites.

Whilst working in Shanghai, he loved walking through the old quarter of that amazing city, developing the idea behind a series of crime novels featuring Inspector Pyotr Danilov, set in 1920s and 30s.

When he’s not writing, he splits his time between the UK and Asia, taking pleasure in playing with his daughter, practicing downhill ironing, single-handedly solving the problem of the French wine lake and wishing he were George Clooney. 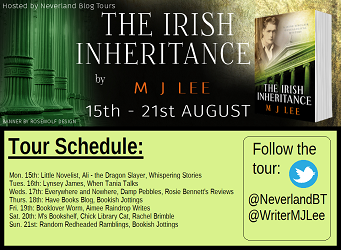