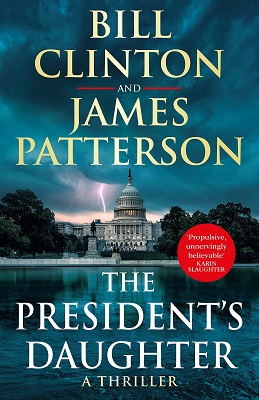 Every detail is accurate because one of the authors is President Bill Clinton.

The drama and action never stop because the other author is James Patterson.

ALL PRESIDENTS HAVE NIGHTMARES. THIS ONE IS ABOUT TO COME TRUE.

Matthew Keating, a one-time Navy SEAL and a former US President, has always defended his family as fiercely as he has his country.

Now these defences are under attack. And it’s personal.

Keating’s teenage daughter, Melanie, has been abducted, turning every parent’s deepest fear into a matter of national security.

As the world watches, Keating embarks on a one-man special-ops mission that tests his strengths: as a leader, a warrior, and a father.

Because Keating knows that in order to save Melanie’s life he will have to put his own on the line . . .

‘The President’s Daughter’ is the second offering from Bill Clinton and James Patterson. This time we meet ex-POTUS Matthew Keating, a former SEAL who was arguably too honest for his own good as President. The book is delivered in five parts with an epilogue at the end. The chapters are short and we see the action in the present tense from a multitude of perspectives in the third person. When we spend time with Keating, the story is told in the first person.

We meet a SEAL team on a mission to capture a notorious terrorist; as an opening hook, this works well as a catalyst for events that follow and Keating has made a vengeful enemy for life.
We witness the adjustment Keating has to make when he no longer has the ultimate power he enjoyed as president. The ex-FLOTUS, Professor Samantha Keating, is now following her own career and their daughter, Mel, is based with her father in New Hampshire and is delighted to no longer be followed everywhere by a security detail. However, this makes her an easy target for a terrorist group who want to extract revenge on her father for ordering the neutralisation of their leader, Asim Al-Asheed.

How much effort is really being put into securing Mel’s release? Will the former president remain passive as the agencies of state try to find his daughter? As an ex-SEAL, the answer to the latter question is emphatically no. He will go back into the field and to the ends of the earth if necessary to find his child.

What unfolds is a story based on the tried and trusted theme of good versus evil. The pages are filled with political intrigue, in-fighting, rivalry, jealously, resentment, frustration, anger, blackmail, betrayal, and fear, versus the unconditional love and loyalty and shared values of a committed family.

There are many diverse individuals, as one would expect in a real life situation but it is often difficult to incorporate so many names into a book. The co-authors get around this by giving the reader a succinct backstory to embed each new person, no matter how brief their appearance. I enjoyed the supercharged relationships between some of the characters, particularly the sour dynamic between Keating and his former vice-president. I was happily prepared to suspend reality as the story unfolded but found the teenage Mel’s steely grit and determination in the face of life-threatening adversity, perhaps a little too incredible.

As with the previous book written by this partnership, the plot, structure and syntax, read very much like a trademark James Patterson novel with literary techniques galore. It’s an exciting, fast-paced, all-action, easy read and it will definitely appeal to Patterson fans. I award 4.5 stars.

William Jefferson “Bill” Clinton (born William Jefferson Blythe III) was the forty-second President of the United States, serving from 1993 to 2001. He was the third-youngest president, older only than Theodore Roosevelt and John F. Kennedy. He became president at the end of the Cold War, and is known as the first baby boomer president, as he was born in the period after World War II. He is the husband of the junior United States Senator from the state of New York and a Democratic candidate in the 2008 US presidential election, Hillary Rodham Clinton.

Since leaving office, Clinton has been involved in public speaking and humanitarian work. He created the William J. Clinton Foundation to promote and address international causes, such as treatment and prevention of HIV/AIDS and global warming. In 2004, he released a personal autobiography, My Life.