The Stars of Heaven by Jessica Dall – Book Review

The Stars of Heaven by Jessica Dall – Book Review 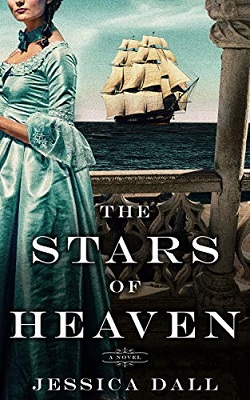 The Stars of Heaven

When one of the largest earthquakes in history hits Lisbon on All Saints’ Day 1755, Cecília de Santa Rita e Durante’s life is turned upside down. With her family possibly dead, she must wade through the ruins that were once her home with the help of John Bates. The English Protestant represents everything she was taught to hate, but he is her only hope of making it through the newly destroyed Lisbon.

Faced with both unspeakable tragedy and an unexpected miracle at home, Cecília leans on John for support. When he leaves, she is forced to reconcile her feelings for him with her long-held beliefs. Left carrying a torch for a man she never should have met, she’s cast into a web of deception, religious upheaval, and political intrigue that leaves her on even shakier ground.

The Stars of Heaven explores a clash of cultures between the European Age of Enlightenment and the Portuguese Inquisition as Cecília navigates the uncharted waters of her new life.

Jessica Dall’s novel, The Stars of Heaven, starts with headstrong, seventeen-year-old Senhorita Cecelia Madalena de Santa Rita e Durante sneaking out of her mother’s house to go to her uncle’s house to ask him to take the family across town so that she can go to Mass with her older brother, Father Francisco Durante.

Tio (uncle) Aloisio Durante can’t help her because he has a meeting, and he instructs his English house guest, John Bates, to escort Cecelia back to her home. On the way to her home, a massive earthquake hits Lisbon, Portugal and Cecelia is covered with debris and is trapped under a large crucifix that broke her rib. The earthquake in the year 1755 levels most of the city.

John Bates and Cecelia walk four hours out of town to her uncle’s vineyard and country estate. Cecelia is worried about the survival of her mother and Bibiana, her ten-year old sister. She sneaks back into Lisbon and finds her mother’s house, which is totally destroyed. She has to flee from looters and runs into an army troop led by a man on horseback, who turns out to be the kings “master”. One of the soldier’s tell Cecelia that her brother is ministering to people living in tents on the east side of town. She and John Bates find her brother and incommunicable little sister who does nothing but pray the rosary in Latin.

Cecelia’s uncle sees a romance developing between Cecelia and the protestant Englishman and he sends John Bates back to England. The rest of the book is about Cecelia survival in the post-earthquake Lisbon society during the period of the Catholic Inquisition. I found myself hoping that Cecelia and John would get back together.

I’d never heard of the Lisbon earthquake. This is a great historical novel. The characters and the flow of the plot are captivating. I gained a better understanding of some differences between the Portuguese and Spanish people. I thoroughly enjoyed the novel and highly recommend it.

Jessica Dall finished her first novel at age 15 and been writing ever since. She is the author of such novels as Raining Embers and The Stars of Heaven and a number of short stories which have appeared in both literary magazines and anthologies.

When not writing, she works as a editor in the Washington, DC metro area.

What did you think of The Stars of Heaven? Share your thoughts in the comment section below!