The Stranger Inside by Lisa Unger – Book Review

The Stranger Inside by Lisa Unger – Book Review 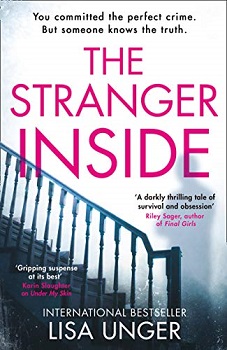 You committed the perfect crime. But someone knows the truth.

You followed the trial obsessively.

You know he’s guilty and can’t believe he got away with it.

But someone is determined to see justice done.

Rain Winter left journalism behind to focus on her baby daughter. But when a man acquitted for murder is killed, in the same way as his suspected victims, Rain sees a pattern emerging between a series of cold cases.

Meticulous and untraceable, this killer strikes in the dead of night, making sure that the guilty are suitably punished for their crimes.

As Rain’s investigation deepens, she must face up to dark secrets in her own past and the realisation that the killer may be closer than she thinks…

Rain Winter was a high profiled investigative journalist until she left the profession to care for her new baby daughter. When the main suspect, that was found not guilty in a murder case she had been following over a year before is found dead in his home the public believe justice has been served, however, Rain is intrigued by his death, especially when it seems that he was murder in the same way his victim had been murdered.

Rain follows her instincts whilst fighting against wanting to return to work and wanting to stay looking after her daughter. She notices a pattern emerging where those found not guilty of crimes are punished in the same way as their victims.

She also harbours a secret from when she was twelve-years-old which saw her kidnapped along with two friends, only two of them survived, even though she was the intended victim. Her past is quickly catching up with her and Rain needs to work out how to deal with it.

This is the first thriller I have read by Lisa Unger. I can see why she has been nominated for numerous awards. The Stranger Inside is full of action, filled to the brim with a plot that will have you in suspense and turning the pages at warp speed. It is also very realistic and make you think about the world we live in.

This is one of those books that plays out perfectly in your head whilst reading, like you having a private movie of the book. Everything from the scenery to the emotions of the characters you can feel inside. There are also plenty of layers to the plot which you get to peel back the more you read.

The book was gripping and I read it in just a couple of sittings, it kept me on my toes and the edge of my seat. My only slight issue was with the ended, I wanted a powerful, full-on ending to match the book but unfortunately, it was good but it didn’t blow me away.

If you enjoy crime thrillers then this is certainly a book to try, snuggle down on a cold dark night for the perfect ambience and enjoy the ride!

Lisa Unger is the internationally bestselling author of seventeen novels, including THE STRANGER INSIDE. With millions of readers worldwide and novels published in twenty-six languages, Lisa Unger is widely regarded as a master of suspense. In 2019, she received two Edgar Award nominations, an honor held by only a few writers including Ruth Rendell and Agatha Christie. The Edgar-nominated UNDER MY SKIN is also a finalist for the prestigious Hammett Prize and Macavity Award for Best Novel. And the original short story THE SLEEP TIGHT MOTEL is a #1 bestselling single.

Unger’s critically acclaimed books have been voted “Best of the Year” or top picks by the Today show, Good Morning America, Entertainment Weekly, Amazon, IndieBound and many others. Her writing has appeared in The New York Times, Wall Street Journal, NPR, and Travel+Leisure. She lives on the west coast of Florida with her family.