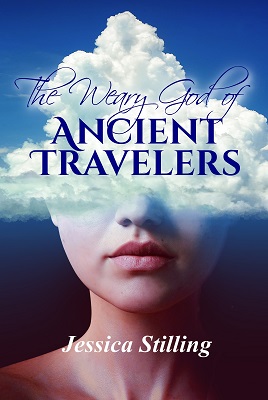 The Weary God of Ancient Travelers

Who is Lydia Warren? That’s what she’d like to know. An amnesiac, she vaguely remembers arriving in Santorini with this one-armed man she instinctive trusts but cannot recall his name. She guides us through the fog that is her mind, and her odyssey towards understanding that is even further complicated by memories of a life not her own from before she was born.

When I initially selected this title I was expecting something between a psychological mystery and a quirky surreal story, but I was not expecting such a hard-hitting and thoughtful tale of a woman struggling to figure out not only who she was, but who she wants to be.

The story follows Lydia Warren, a woman who has no idea who she is. She is living in Santorini, Greece, with a one-armed man she believes is a friend but cannot recall his name no matter how many times he tells her. As she attempts to remember who she is and what caused her to forget, or repress, her former life, she begins to consider far-fetched options that slowly begin to reveal themselves as possible truths.

This was a hard review to write because so many of the great things about this novel are the result of the turns it takes! The novel starts you off a little confused, but I think that’s an intentional mimetic choice. The main character is suffering from long-term memory loss, in that she cannot recall most of her past, and she also forgets things from the present. This trope is a dangerous one to approach, as it often slides into cliché, but it worked for me because it’s clear the amnesia is not the result of one incident (like most of the books/movies featuring this disorder), but her brain deciding it has had enough psychological trauma and essentially shutting down. Lydia has had a very hard life with multiple incidents of terrible suffering. Her amnesia to me was less of a plot device than a way to show how the human mind protects itself from trauma and that we can work past it if we just give ourselves enough time.

The story takes a winding, circuitous route that moves at a languid yet not stilted pace that allows the mystery to unravel organically. The ending isn’t hard to guess, but the lead up is intriguing, at times heart-breaking, and occasionally amusing.

The novel also includes evocative descriptions of Greece, with forays into small towns, the seaside, Athens, and the mountains. I was as much enthralled by the “scenery” of the novel as I was of the story.

Overall, I found The Weary God of Ancient Travelers to be an introspective look into how we handle our pasts and I recommend it to those who enjoy their mysteries based more on self-reflection than big reveals.

Trigger Warnings for mentions of child sexual abuse, the Holocaust, and domestic violence.

Jessica Stilling has published three literary novels and three YA Fantasy novels under the pen name JM Stephen. Her work has appeared in Ms. Magazine, Bust Magazine, Tor.com and The Writer Magazine. Her short fiction has appeared in places such as The Warwick Review, Wasafiri and The New Reader Review.

She has taught Creative Writing in New York City at The Gotham Writers Workshop, The City University of New York and The New School. She lives in Vermont where she currently lives with her family, her dog, her cat and a bunch of chickens. She writes for The Deerfield Valley News. The Weary God of Ancient Travelers is her third literary novel.

What did you think of ‘The Weary God of Ancient Travelers’? Share your thoughts in the comment section below!