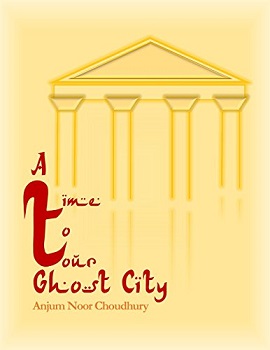 A young woman on vacation with her parents discovers she can see ghosts in the Stone City of the Crescent Valley. When her parents are taken hostage by a rogue tour guide, she must mediate with one of the ghosts to get them back.

But ghosts are the least of her problems in this perilous adventure that takes her back thousands of years, to a time when the Valley flourished with life and a legendary Brotherhood roamed its sands.

Leela and her parents were on a three-day holiday. They decided to hire a tour guide for the duration of their stay, smooth talking Altaf.

Leela didn’t trust, nor like Altaf, especially after he took a fondness towards her. One morning Altaf took the family to Crescent Valley, to the Stone City. Whilst there, Leela started noticing strange events, including strange people up on the cliffs, but no-one else seemed to be able to see them. In the end she blamed the heat from the sun, which had given her a headache for the visions.

Later that night Altaf kidnapped her, telling her he knew that she had seen the people in the city, and that legend had it that there was treasure buried there, and only those who can see the people from years gone by, can find it.

A Time to Tour Ghost City, is a very short book, at only 48 pages long. The blurb had me eager to read it, and hoping it was something that I could read in under an hour, and really sink my teeth into.

However the book lacked what all short stories/novellas need; fast pace. The book was slow throughout. There is no time in a short story to have that build up, the slow-paced middle, and then the fast-paced ending. Yet this book was just one slow pace throughout. There was no real action, no heart-racing scenes, and there was nothing scary about it, which I was hoping to be a little shocked, seeing as we were dealing with ghosts.

The book mainly consisted of Leela and Altaf, with a few minor scenes with others. Unfortunately both of them lacked character, and I didn’t feel any connection to them, nor were interested in their plight. I also couldn’t tell you where this book is set, as it isn’t mentioned, either that or I completely missed it. I did re-read chapter one, and it certainly isn’t stated there. I can only presume it is set in India, due to the mention of Indian motifs in the valley, but I’m not certain.

The story was filled with descriptions, whether that was of the scenery, or of the the characters. This is partly to blame for the slow pace. Yes these were written wonderfully, and you could get a real picture of what the place, and the people looked like. There was just too much of it, and often it felt like padding. Remove a lot of what I feel was unnecessary descriptions, and you cut probably cut this book down to around 44 pages, instead of 48.

A prime example of this is right at the start when we meet Altaf. ‘He was very handsome, and he knew it. His dark face was precisely rectangular with high cheekbones, a strong jaw and a resolute cleft chin. He had a head full of luscious black curls he kept trimmed just below his ears, and he had a wide devilish smile that unabashedly showed off a tiny gap between his upper incisors. The most lethal of his traits, however had nothing to do with his boyish rugged good looks. It was his indomitable charm’.

For a short book, I found A Time to Tour Ghost City hard to read, and it took me a while to get through it as I lost interest once the family had returned from the Stone City. But I made sure that persevered, as it wouldn’t be fair to judge a book until I had read all of it. This just isn’t a book for me, I’m afraid.

Anjum Noor Choudhury loves pulp and magic in fiction. She loves reading about ordinary characters in extraordinary situations, women taking control of their fate, friendship, and wondrous locales. Naturally, her writing strives to incorporate all those things and more.

When she is not writing fiction, she tries to do normal things like work an office job and be a responsible member of society. She graduated from Mount Holyoke College in 2015 and now lives in Dhaka, Bangladesh.