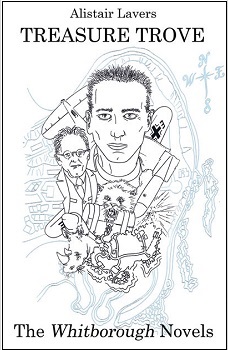 Treasure Trove is a joyous romp of a comedy novel taking place in a Yorkshire seaside town and revolving around a whole host of amusing characters of questionable integrity and their search for ancient treasure.

It’s 1983 and Easter weekend dawns in the upmarket town of Whitborough-on-Sea, but events unfolding behind the scenes conspire to ruin any prospect of a prosperous and peaceful holiday. A Spanish Armada treasure is discovered – and lost. An ancient curse is reawakened and the town’s adopted ship is sunk by a civil war cannonball.

Treasure Trove is the first book in the Whitborough series, and is a laugh-out-loud novel that will appeal to fans of Tom Sharpe’s novels, David Croft and Jim Perry.

Back in the seventies and eighties there was a passion for large glossy coffee-table books and I recall one that contained large scale cartoons of scenes with numerous characters doing all sorts of things. Some parts would make you smile, some would make you laugh out loud and some parts would just pass you by. The advantage was that you could spend as long as you wanted looking at the drawings, returning later if required to look at specific sections.

A book does not work that way. You start at page one and read until the end so the author needs to lead us through and keep our interest.

Alistair Lavers has created some interesting characters and he is very good at descriptive passages. I particularly liked the opening pages of Chapter 2 when he takes us round the waking town in a style similar to Under Milk Wood. However, if I was not reviewing the book I fear I would not have made it to Chapter 2. To get there I had to weigh through the Precursors which were written in what purported to be 17th Century English dialogue and Chapter 1, which I found confusing and barely made me smile.

Just like the cartoons that I mentioned earlier there were many characters and various plots. After a while I gave up trying to work out what was what and I just read for such humour I could find.

Unfortunately due to my lack of enjoyment, I feel I can only award Treasure Trove two stars.

Alistair is 50 and lives in a village with his wife Julie, close to Pickering in N.Yorkshre. He was born is Westphalia in Germany and still can still remember the words to ‘Silent Night’ in German – which makes his dog howl. After moving to the UK in 1968, the family moved to West London, Farsley in West Yorkshire and then Scarborough. He has also lived in Plymouth and returned to London in the 1990’s, before coming back to the Yorkshire coast, to buy his first home.

He worked as a self employed Graphic Designer, illustrator and freelance photographer for many years. Largely within the music industry and motorcycle press; and became a junior partner in an independent rock alternative record store during the 1980’s. Where he organised trips to concerts and sourced rare records.

He is a fan of motorcycles and classic cars, beachcombing, goth, rock and 1940’s big band music. The Goodwood motor festival, the Edinburgh fringe and Pickering War Weekend. And still attends many music events.

He is fond of a curry and Belgian Beer.