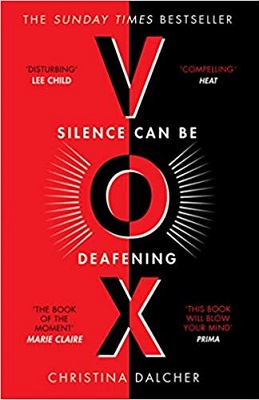 Silence can be deafening.

Jean McClellan spends her time in almost complete silence, limited to just one hundred words a day. Any more, and a thousand volts of electricity will course through her veins.

Now the new government is in power, everything has changed. But only if you’re a woman.

Almost overnight, bank accounts are frozen, passports are taken away and seventy million women lose their jobs. Even more terrifyingly, young girls are no longer taught to read or write.

For herself, her daughter, and for every woman silenced, Jean will reclaim her voice. This is only the beginning…

Vox is a dystopian novel set in the USA where the female population has been silenced to just 100 words a day. The changes came one at a time, beginning with females not allowed passports, then their jobs were taken, as well as their books and phones. To monitor their words they have to wear bracelets that keep track of how many words they have said, go over the 100 words and a painful electric shock is the response.

I love a good dystopian novel and this one had me raging, not only at the insinuation that women needed all these measures in places to be loyal to their husbands and god, but to think that a government even thought of silencing half of the population, who did they think they were? I’m sure if this was to be announced in real-life there would be so much backlash that it would never get through, but that is the greatness of books in that the author can make anything she wants to come alive in her novel.

The writing flowed naturally and with short chapters, it felt quite urgent and exciting too. The characters, especially Jean McClellan were inspiring to read about. Especially how she felt for her young daughter, she knew her husband felt guilty at what they were having to go through and also that her eldest son didn’t seem to have an issue with the measure, in fact, he agreed with the government and she had to be careful around him, not letting him see any breaking of the rules.

I loved the family dynamics and the power play. I didn’t have an issue with the religious aspect of the book and that Christians were to blame for the government acting the way it had as I’m not religious, though I can see how some might get their backs up at the idea. The author is brave to tackle this subject. However, there was quite a lot of science lingo which some went over my head so there were parts that I had to read more than once or slowly to make sense of them.

Overall, if you love dystopian novels then this is a great book, just be wary of shouting at it if you are female!

Christina Dalcher earned her doctorate in theoretical linguistics from Georgetown University. She specialized in the phonetics of sound change in Italian and British dialects and taught at universities in the United States, England, and the United Arab Emirates.

Her short stories and flash fiction appear in over one hundred journals worldwide. Recognition’s include first prize in the Bath Flash Fiction Award as well as nominations for The Pushcart Prize, Best of the Net, and Best Small Fictions.

After spending several years abroad, most recently in Sri Lanka, Dalcher and her husband now split their time between the American South and Andalucia, Spain.