This week on ‘The Writing Life of:‘ I am thrilled to be interviewing author Azaria M.J. Durant. Azaria will be sharing with us detail of her writing life, telling us all about her latest book ‘Broken Arrow‘, which was released on 29th July 2018 and answering a few fun questions too.

So without further ado I’ll hand you over to Azaria M.J. Durant 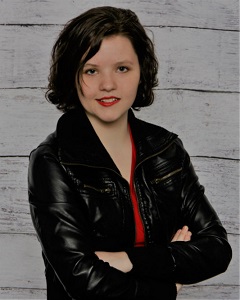 Azaria M.J. Durant is a passionate writer of fantasy with plans to branch out into sci-fi and dystopian. She enjoys writing stories with lots of adventure, unexpected twists, and fleshed out characters that challenge gender roles and expectations.

Azaria lives in Atlantic Canada with her family, cats, and dogs, and her big dreams to travel the world. In the moments when she isn’t writing, she is sketching concept art for her stories, participating in community theatre, or curled up with a good book and a box of mint chocolates.

I wanted to be an ice dancer, a police officer, or an explorer (I couldn’t really decide). But that was only until I discovered writing at the age of eight.

As a child, I mostly loved reading old folk tales, like Robin Hood and King Arthur. My favourite author, coincidentally, was Sir Walter Scott because of his book Ivanhoe. I read everything JRR Tolkien. Jane Austen was also a favourite (I loved the classics).

I realized I wanted to be a writer when I was eleven, when I participated in Nanowrimo for the first time. My goal was 20,000 words, and I finished with a good 22,000, and I realized I had so many more ideas that I wanted to be written. So I just dove right into my next idea, and have been writing ever since.

Other than just starting to write, I bought my own computer and convinced my mom to get me a novel writing course. My entire teenage years consisted of writing, rewriting, and editing my now debut novel Broken Arrow.

Basically I write whenever I have the chance. If I have a good writing day – for me, this means everything comes very easily and I have pools of untapped inspiration to work with — I try get as much writing done as I can while it lasts. Once I get writing, I can write for hours if I’m not interrupted.

I did, yes, but then I realized that my name is already much cooler than anything I could come up with on my own.

No, I don’t think I do. Maybe the fact that I don’t give myself many breaks because I’m a very focused, very driven person.

I write on a computer. I try to outline longhand, but a computer is much faster and can keep up with my thought process.

I’ve written eight books so far, the first five of which were written when I was under thirteen, so I don’t tend to count them. The other two are books that I’ve completed multiple drafts for and are in the Darkened Destiny series (sequels to my current book Broken Arrow), which will be published in the next few years.

A plotter, I believe, for the most part. I don’t extensively plot things out, but I do have an idea of my plot before I start writing.

I do read all of the reviews left for my book, yes. I haven’t gotten any official bad reviews just yet, but I did receive one unofficially. I just shrugged, looked at all of the 4-5 star reviews I have, and chalked it up to one person’s opinion. I do, however, try to learn from all the negativity that comes my way. 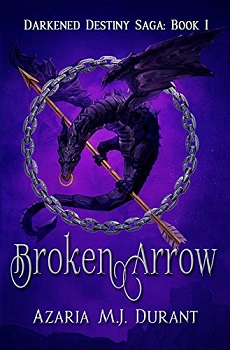 An ancient power long kept dormant stirs in the shadows once more as one boy embarks on a quest to earn his freedom and the freedom of his world!

Magic has turned to myth, the Vaelhyreans of old to legend, and the power wielded by the ancients has long been forgotten. However, with Ealdred, a mere half-breed slave boy, myth becomes real, the forgotten remembered, and the power of legend is reborn within him.

Ealdred is merged into a world of mystery, brimming with deceit, where the remaining Vaelhyreans are in a desperate fight for their very survival. When Ealdred is kidnapped by the power-mongering dark lord Zeldek himself, he must make a choice; to commit his newfound magic to Zeldek’s service or die. But when he meets Bellator, clever yet treacherous servant of Zeldek, an alternative is presented to him: to escape from Zeldek’s stronghold and embark on a quest to find a cursed arrow and free the Vaelhyreans from the spell that keeps their powers at bay.

Yet how can he survive in a world where magic is illegal, half-breeds are hated, and the four countries are on the brink of war?

I had two different methods when coming up with the names for the characters of the Darkened Destiny series. One, when I was first coming up with the idea, I spent a day looking up names on baby name websites and writing them down in a notebook. I still look through those names I wrote down when I need to name a character.

My other method is to use Google Translate to look up words that I want to mean something, and either use that as a name (that’s how Bellator got her name) or use letters from them to make up my own names (which is where Zeldek got his name).

Ealdred is driven mostly by his longing for freedom and his desire to see the world be a better place. Growing up as a hated half-breed slave, he has seen all the cruelty the world has to offer and hopes one day to be able to fix them. He also doesn’t know who his parents are, or even if they’re still around, so another thing that drives him is his desire to one day find them and have them be proud of him. But he’s also willing to sacrifice everything he wants to help someone else, because he thinks he’s worthless. It’s an odd mix of selfishness and self-depreciating selflessness.

The hardest scene to write was the conversation between Bellator and Ealdred at the end of the book. It was hard to put all of the character development that happened in recent events into focus, so the conversation kept coming out wrong.

I did. I got my mom and brother to look it over, but I also hired a professional editor to go through it as well before starting to query different agents and publishers.

I spent two-three years searching for agents and publishers, starting when I was around 17 years old. At the beginning of this year, I was starting to get a bit discouraged, so my mom and I decided we would self-publish it for now, while still trying to get it published traditionally, and see what happened. So I sent it to a second professional editor, worked with an artist to design the cover, then published it as an eBook on Amazon, and ordered 1000 paperback copies from a manufacturer.

Darkened Destiny is a series of six planned books, so I’ll have my hands full with that for at least a couple of years. I’m working on editing the second book and rewriting the third right now.

Black. It’s my happy colour, and I could draw things with it.

How to Train Your Dragon 2. I love the first one, but the second one was absolutely perfect. The epic flying, character development, the pain, and the plot; it was all perfect! Not to mention the killer animation.

It varies from day to day, but right now the three top songs on my playlist are “Prophecy” by Adrian Von Ziegler, “Dark of You” by Breaking Benjamin, and “Indestructible” by MAX (feat. Not Your Dope).

I’d probably use it to help buy my family of twelve siblings/two parents a house big enough for all of us in a location where we want to be. That’s been my goal for most of my writing career, honestly. If I can help out with that somehow, I’ll be happy.

“You are having a very bad dream.”

You can find out more about Azaria M.J. Durant by visiting the website/social media sites below.

I would like to say a big thank you to Azaria M.J. Durant for sharing with us details of her writing life, and for a wonderful interview.