The Writing Life of: Jane Thynne

This week on ‘The Writing Life of:‘ I am thrilled to be interviewing author Jane Thynne. Jane will be sharing with us detail of her writing life, telling us all about her latest book ‘Solitaire‘, which was released on 18th May 2017, and answering a few fun questions too.

Jane Thynne was born in Venezuela and educated in London. She graduated from Oxford University with a degree in English and joined the BBC as a journalist.

She has also worked at The Sunday Times, The Daily Telegraph and The Independent, as well as for numerous British magazines. She appears as a broadcaster on Radio 4. Jane is married with three children and lives in London.

I had passionate desires to be a doctor or a politician, and I regret both those lost careers, but writing for a living was always the dream.

Frances Hodgson Burnett and Charlotte Bronte. I also loved My Side of the Mountain by Jean Craighead George, due to an early survivalist streak.

At fifteen I began writing and circulating stories featuring my school-friends, which they seemed to enjoy, and it struck me that people liked the idea of being transposed into a fictional setting. I suppose I’m only doing more of the same today.

I knew I needed a job associated with writing so I became a journalist, first at the BBC, directing films and reporting, then in Fleet Street.

I sit at my desk at 8am, and try very hard to write a thousand words. It doesn’t always work!

I don’t, but I have thought about it, especially if I wrote in two different genres. The strange thing is, I can name any number of characters but I simply can’t think up another name for myself.

Sitting down and trying to create an entirely fictional universe is probably strange enough.

Apple Mac. My work-in-progress standalone novel features a 1931 Underwood typewriter, but personally I’m relieved to be free of the Tippex and the carbons and the ribbons.

Ten to date, but there’s not a writer in the world who doesn’t have unpublished work in their drawer.

I love a plot. I like to have it entirely structured before I begin writing, then extra ideas and twists emerge organically, which is part of the joy.

I think I read most of them. My only coping mechanism is angst. 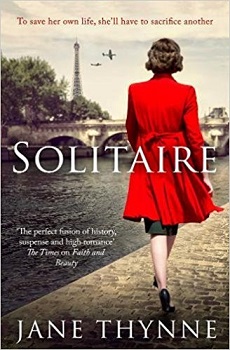 TO SAVE HER OWN LIFE, WILL SHE SACRIFICE ANOTHER?

June 1940: the first summer of the war. Berlin is being bombed and nightly blackouts suffocate the city. Then France falls and a shadow descends.

A shadow has fallen over Clara Vine’s own life, too. She is an Anglo-German woman in a country that hates England. Then she is summoned to meet the Propaganda minister, Joseph Goebbels, who has decided that Clara should adopt a new role – as his spy.

Much as she dislikes the idea, Clara realises this might be the chance to find an escape route to England. But Goebbels has other ideas and soon Clara is drawn into a web that threatens to destroy her. As everything she holds dear is taken as ransom, she must fight to protect her family – and to survive…

Solitaire is the fifth in a series of Clara Vine novels, so that makes things easier. When you write a series you already know your protagonist and their back history, you just need to find a new plot to entangle them. That said, it took around a year to write.

Most of the people in the novel are real people who lived in Germany during the Third Reich. Clara is fictional, but I had always loved that name, and conveniently it sounded both English and German, as is Clara herself.

Clara Vine is an Anglo-German actress who arrives in Berlin in 1933 just as Hitler comes to power and witnesses the rise of fascism at first hand. She is not especially brave or political, and it is pure chance that she gets involved in espionage when she falls in love with the man who recruits her. Yet as time goes on, Clara’s access to the Nazis’ VIP ranks is increasingly valuable – and increasingly dangerous.

I probably worked hardest on the scene I loved writing, when Clara attends a garden party given by Wallis Simpson and the Duke of Windsor.

The title, Solitaire, echoes a couple of plot strands. Firstly, Clara is on her own, because her lover has been killed. Also the storyline involves diamond smuggling, and thirdly, card playing and especially the game of Solitaire became hugely popular among German women left behind after their husbands had gone to war.

The novel was pre-commissioned, so I had only to write and deliver.

Made a cup of English Breakfast tea.

I’m just finishing a standalone novel, provisionally called The Typewriter. It’s a split time narrative set in the 1930s/40s and the present day and features two sisters, divided by war.

Does anyone not say chocolate?

Yellow always. The colour of sun and happiness. I painted my study primrose yellow so it would give me a lift every time I walked in.

Nina Simone, He’s Got The Whole World In His Hands

I’d like to think I’d help out some relatives, but it would almost certainly be an addition to my daughter’s extensive wardrobe.

Probably the same thing everyone asks when they walk into my room. ‘What’s for supper?’

You can find out more about Jane Thynne by visiting the website/social media sites below.

I would like to say a big thank you to Jane for sharing with us details of her writing life, and for a wonderful interview.