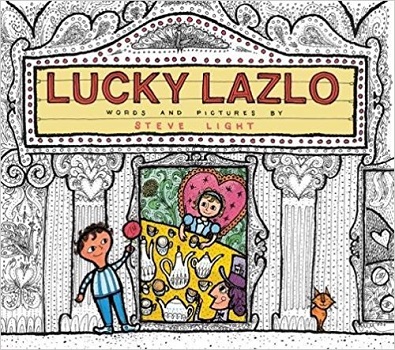 Lazlo is in love. So, with the perfect red rose in hand, he sets off to the theatre, where the girl of his dreams is starring in Alice in Wonderland.

But when a cat snatches the flower and dashes backstage, Lazlo is in for a bit of bad luck. And it’s no wonder, since, at the Peacock Theatre, they’ve broken every superstitious rule in the book. The chase is on – past the tailor, into the orchestra, over the prop table . even through The Mad Hatter’s tea party!

Will Lazlo catch the cheeky kitty in time to present the flower to his lady love?

Lucky Lazlo is an exceptionally clever tale about superstition and the theatre, told through a charming story of love.

Lazlo is off to the theatre to watch the girl of his dreams play Alice in, Alice in Wonderland. He bought her a beautiful red rose, the last that the florist had. Unfortunately on the way to the theatre, he walks straight into a clock tower and drops his rose. Subsequently, a ginger cat picks it up and runs off with it into the theatre, via the stage door.

Lazlo gives chase, and follows the cat as it runs amok inside, causing all sorts of problems. Will Lazlo get his flower back? Will the play still go ahead with all the chaos the cat is causing?

When I first picked up Lucky Lazlo I actually thought it was one of those story colouring books, as only part of each full page illustration is in colour, the rest is in black and white. This style of illustration works really well with the story. 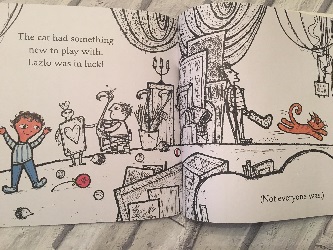 As the two, Lazlo and the cat, enter the theatre each page is dedicated to some sort of mischief that they cause, from smashing the props to running through the orchestra, these two cause lots of problems.

When you get to the end there is a page from the author about ‘Theatrical Superstitions’. There are a lot of different superstitions (not sure a young child would be interested in them, but adults most likely will be), such as – Peacock feathers are said to bring bad luck as the feathers contain the ‘evil eye’. Once you have read through them you then can go back and see how many you can find hidden in the story.

This is a short quick read, that is engaging and fun. I personally think that the book could be used as a colouring book, as long as it is owned by you and not the school or library!!

Steve Light grew up in an enchanted place known as New Jersey. He went on to study Illustration at Pratt Institute, he also studied with Dave Passalacqua. Upon graduating he did some corporate illustrations for companies such as: AT&T, Sony Films, and the New York Times Book Review.

Steve Light then went on to design buttons that were acquired by the Cooper-Hewitt Design Museum. He has since published several children’s books with various publishers. He has read and told stories all over including The Eric Carle Museum of Picture Book Art and The Milwaukee Museum of Art.

Steve loves to draw. He draws everyday whether it is drawing in his sketchbook or on fancy paper for an illustration. Steve loves fountain pens and collects these ancient artifacts in order to draw with them. He also loves making things. Steve usually makes things like sculptures and toys out of wood. Steve loves sharing his art and stories with children.