The Year of the Snake by M.J. Trow and Maryanne Coleman – Cover Reveal

The Year of the Snake by M.J. Trow and Maryanne Coleman – Cover Reveal 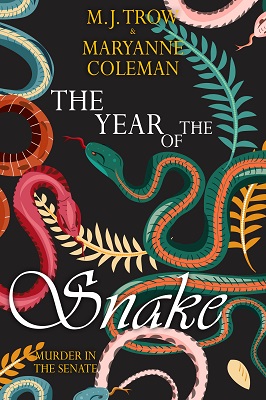 Sometimes, a snake is just a snake. And sometimes… First-century Rome.

As he embarks upon the funeral ceremonies, Calidus becomes more and more convinced that his master was murdered and begins an investigation, seeking out everyone who had attended the dinner party. His enquiries lead him to rub shoulders with the ‘great and good’ of Rome; senators, soldiers, even the ruthless and mercurial Emperor Nero. And his former lover, Julia Eusabia, who
seems intent on rekindling their romance and luring him away from his wife and daughter.

Calidus’ quest is by no means easy or safe as he encounters the darkest and most dangerous people in Rome. But he knows he must keep searching for the person responsible, to bring justice to the master he had loved.

This racy historical whodunnit brings to life the sights, smells and sounds of ancient Rome, with sharp humour and a Christie-style finale to boot.

Mei (M.J.) and Carol (Maryanne Coleman) Trow have been married for forty-five years and have been writing together for roughly seven. Carol has written two books of a fantasy trilogy,
Goblin Market and Pandemonium. Mei has written almost one hundred books altogether, fiction and non-fiction which includes military, historical biography, true crime and some acclaimed
‘ghosting’ projects, including the number one bestseller Survivor.