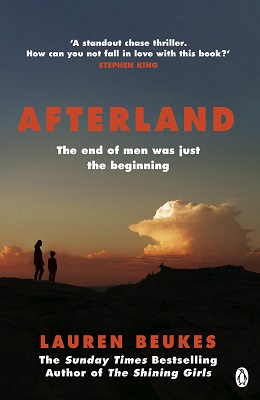 A WORLD OF WOMEN

A MOTHER AND SON ON THE RUN

Three years after a virus wiped out most men on earth, Cole’s son, Miles, is one of the rare survivors.

Yet in this changed world, there are women who would kill to get their hands on that most prized commodity – a living boy.

Getting Miles to safety means crossing America with deadly pursuers hot on their heels – including Cole’s own sister, Billie.

But if there are some who will commit any crime to possess Miles, Cole must face some terrible choices to protect her son . . .

Afterland is a dystopian novel set in a world where most men have died from viral prostate cancer. The book is set in the USA and begins right in the thick of the action as Cole flees with her son, twelve-year-old Miles, trying to get him to safety, preferable to South Africa, away from those who want him, including her sister Billie who Cole has just attacked and left for dead.

Cole and Miles are from South Africa and had travelled to America with Devon, Cole’s husband, when her nephew was diagnosed with cancer. Devon found work out there so they decided to stay for a few months but then the virus hit killing Devon and leaving Cole to fight for her son to have a normal life away from a government that wants to put him in a male prison to protect him and from the clutches of women who want him as semen is the new gold.

The plot is told from Cole and Billie’s point of view and moves back and forth in time. I was intrigued to see what a world looked like where women not only ruled but where very few men existed. It was fun to see some of the women dressing like men with fake moustaches, etc sitting at bars or women watching old football games so they can get their men fix!

From the off Cole announces that she is no Ripley or Sarah Connor, she doesn’t have their skills or knowledge to fight everyone and anyone coming after her son, but he is her son and she will die trying to save him. She makes Miles dress as a girl to hide him and calls him Mila. To survive they have to embrace this new life and identity and fit in with those they wouldn’t normally associate with.

Whilst I love the idea of Afterland and enjoyed the whole cat and mouse chase across America between Cole and Billie, I was left with an air that something was missing. I wanted to know more about the men that were left and especially more from Mile’s who as a young lad of twelve years old knowing that he was going to have to live the life of a female for the short-term at least, that puberty was creeping up on him and that it was likely that most of his friends had died from the virus that somehow he was immune too must have been hard, but Mile’s is there in Cole’s parts of the book so we don’t get inside his head.

Afterland is full of action. It is character-driven and it explores a world that is honestly quite frightening when you think about it. How does the world continue to exist without men?

She won the 2011 Arthur C Clarke Award for her novel Zoo City, set in a fantastical Johannesburg where guilt manifests as spirit animal familiars. Her previous works include Moxyland, a dystopian cyberpunk thriller set in Cape Town under corporate apartheid.