Because everyone hungers for something…

Food and Sex: two appetites the modern world stimulates, but also the ones we are expected to keep under control. But what happens when we don’t?

Embarking on an affair, lonely wife and mother Naomi blossoms sexually in a false spring while David, the fattest boy at the local comprehensive and best friend of her son, struggles to overcome bullying and the apathy of his divorced mother.

David finally starts to learn about the mechanisms of appetite through a science project set by his intelligent but jaded teacher, Matthew. David’s brave efforts to change himself open Matthew’s eyes to his activist girlfriend’s dangerous plans to blow up VitSip, a local energy-drink company where Naomi works.

At the mercy of their appetites, this exciting debut novel shows that some hungers can never be satisfied..

Appetite is a fascinating piece of fictional work. The plot follows three individuals who each have a different ‘appetite’,(an addiction).

Teenager David is overweight, not just slightly, but massively overweight. He is the fattest kid in school. He gets his pleasure in life from fizzy drinks, sweets and chocolate bars. Because of his size he gets bullied quite a lot, but whilst not showing any emotion on the outside, he hurts on the inside. The more upset he gets, the more he eats. The more he despises himself, the more he eats. He does have one lovely friend, the skinniest kid at school, James.

Naomi is a married, middle aged woman, and James mum, whose life is a never ending groundhog day. She wants more from life and is envious of others who are still having fun. She also has sexual urges and it doesn’t take long before someone taps into them. From what starts off as an innocent online chat with her friend’s partner, turns into a full blown affair based on sex. She also works for a company that makes energy drinks.

Matthew is the high school science teacher at the school David and James attend. He has just returned from visiting Brazil, where the trip has opened his eyes to the different way of life over there. He feels like he wants to make a difference back home. Meeting Polly, an activist, gives him that push to try and make a difference, but how far is he willing to go for the girl he has fallen in love with, especially when she want to take on the company Naomi works for?

Appetite is a multidimensional book covering a lot of subjects, and would be great for book clubs to read and discuss, as it challenges the readers to face up to their own appetites. It has been intelligently written by an author, who has clearly done her research.

At the beginning, it seems like a story about three completely independent individuals. As the story progresses, you realise that their lives are interwoven in some way or another.

The book is told in snippets of time, with each chapter around two weeks long. It begins on Monday 7th January and ends on Sunday 18th August. This time framing seemed to move the book along at a nice pace. It also helped me to visualise the story better, as it gave it an authenticity, knowing with ease what season of the year the scenes were in, what the weather would normally be like, events that were happening, etc.

This is a book that makes you think, not only as you read, but once you have closed it for the last time too. It combines hard hitting, sometime complex issues, with a fantastic character driven story. Each character felt alive as the book was written with such honesty about how these ‘appetites’ affected their lives. The author also gives you an insight into why these appetites existed.

This is a book that had me hooked from the very beginning. There are so many levels to this story, more that just the main characters struggles. This book is definitely worth your time and money.

I am a writer, a relationship radical, a mother, a daughter, a sister, an aunt and a friend. I am also a lover of old books, new music and (mostly) clean food. Whilst I understand the limitations of labels, I do identify as bi-sexual, polyamorous and kinky. Above all else, I am curious about everything: about life, about learning and about love. 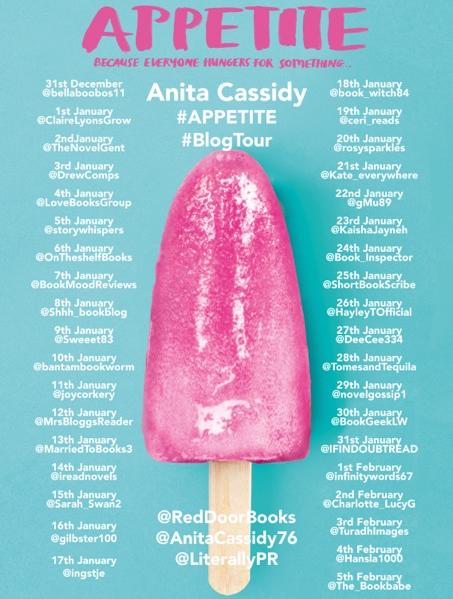