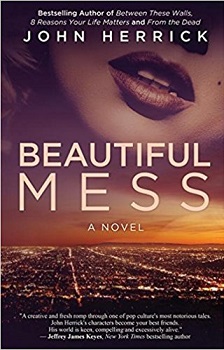 A fallen star. Four Los Angeles misfits. And the Marilyn Monroe you only thought you knew.

Del Corwyn is an aging relic. An actor who advanced from errand boy to Academy Award nominee, Del kept company with the elite of Hollywood’s golden era and shared a close friendship with Marilyn Monroe. Today, however, he faces bankruptcy.

Humiliated, Del is forced to downgrade his lifestyle, sell the home he’s long cherished, and fade into a history of forgotten legends—unless he can revive his career. All he needs is one last chance. While searching through memorabilia from his beloved past, Del rediscovers a mysterious envelope, dated 1962, containing an original screenplay by Marilyn Monroe—and proof that she named him its legal guardian.

Del surges to the top of Hollywood’s A-list overnight. But the opportunity to reclaim his fame and fortune brings a choice: Is Del willing to sacrifice newfound love, self-respect and his most cherished friendship to achieve his greatest dream?

A story of warmth, humor and honesty, Beautiful Mess follows one man’s journey toward love and relevance where he least expects it—and proves coming-of-age isn’t just for the young.

Delbert “Del” Corwyn, the protagonist of the book, is an actor in his late seventies.  He is in great shape, living everyday after a certain schedule including daily runs and healthy food.  In 1978 he was nominated for an Academy Award he never got and since then he is aiming for a great comeback as an actor in Hollywood, more so now as his financial situation has become quite delicate.

His career began in the last years of the Golden Era of Hollywood. Back then, he was acquainted with the stars. A good friend of him was Marylin Monroe and she seems to be the ticket to his comeback over 40 years later where nobody seems to know his name Del Corwyn anymore.

As a a lifelong bachelor Del’s list of affairs is long. Two women are currently playing major roles in his life: Nora Jumelle, the new star in Hollywood and Felicia, a minster.  Unfortunately, there are parallels between the life of Marilyn and Nora and Del, reminded of his grief after losing Marylin, is afraid of losing his new friend too.

Ok, I can’t hold back here: I loved this book! Right from the first sentence, I was so into it. First of all, I noticed the great writing. John Herrick is a very talented author with a gift: he can tell great stories in an engaging way.

A Beautiful Mess is well plotted, well written and it really drags you into the world of Del and his friends. Moreover, you begin to feel for them and live with them through their difficulties. Del’s journey, his search after the Meaning of Life, is something we can all relate to and you want nothing more than him becoming a lucky man after all.

I can only warmly recommend reading this book and let you all find out how it all works out for Del and his loved ones, because it is an utterly beautiful story. Now, there nothing left to say except me giving this book one of my very rare 5-star-ratings.

When he decided to become a novelist, John Herrick did not expect to invest the next twenty years in what would seem a grueling, disconnected process.

A native of St. Louis, Herrick fell in love with writing fiction at eight years old, and by age eleven, his goal shifted from short stories to novels—and turning a hobby into a career.

Challenged with a constant flow of fresh ideas and lack of patience to complete such long-term projects, he merged the written word with another love: music. Herrick spent fifteen years developing his songwriting and lent several songs to benefit recordings by nonprofit entities.