The Book of Forgotten Authors by Christopher Fowler – Book Review

The Book of Forgotten Authors by Christopher Fowler – Book Review 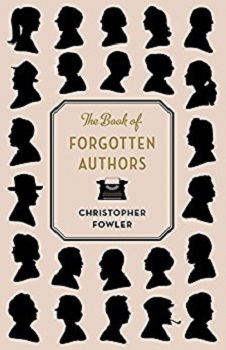 The Book of Forgotten Authors

So begins Christopher Fowler’s foray into the back catalogues and backstories of 99 authors who, once hugely popular, have all but disappeared from our shelves.

Whether male or female, domestic or international, flash-in-the-pan or prolific, mega-seller or prize-winner – no author, it seems, can ever be fully immune from the fate of being forgotten. And Fowler, as well as remembering their careers, lifts the lid on their lives, and why they often stopped writing or disappeared from the public eye.

These 99 journeys are punctuated by 12 short essays about faded once-favourites: including the now-vanished novels Walt Disney brought to the screen, the contemporary rivals of Sherlock Holmes and Agatha Christie who did not stand the test of time, and the women who introduced us to psychological suspense many decades before it conquered the world.

This is a book about books and their authors. It is for book lovers, and is written by one who could not be a more enthusiastic, enlightening and entertaining guide.

The Book of Forgotten Authors, is a title that couldn’t be more fitting as this book is just that. It is filled to the brim with 99 authors that Christopher Fowler deems to have been forgotten by readers.

Some of the authors in the book that are deemed ‘forgotten’ you may actually be familiar with, whilst others you may never have heard of before, but you may recognise the names of their books, or even the movie adaptations of them.

An example is Pierre Boulle – Some may have never heard of him before, but I bet a few of you have heard of the film ‘Bridge Over the River Kwai’, and I suppose more famously ‘Planet of the Apes’. Both were his writing.

What about Arnold Ridley? For those over a certain age, and in the UK, you may know him better as Private Godfrey from the Dad’s Army TV series. However in his younger years he wrote many plays, including ‘The Ghost Train’ starring Arthur Askey.

Each of the 99 authors are given a small biography, information on their life, their books and why Christopher Fowler believes that they have been forgotten.

The book is quite addictive and I was surprised at how much I became hooked by the authors. I was fully invested in the information provided and loved learning about each of them, especially those I’d never even heard of before.

In someways I actually found myself feeling sorry for them. After all that time, effort and dedication it took to write the book(s) that they hoped people wanted to read, and when first published people did read them, yet years/generations later, a lot of people don’t even know who they are/were, or the names of their books.

Christopher Fowler has opened my eyes to a diverse arrangement of authors whose work I will have to look out for.

Christopher Fowler was born in Greenwich, London. He is the multi award-winning author of 45 novels and short story collections, and the author of the Bryant & May mysteries. His novels include ‘Roofworld’, ‘Spanky’, ‘Psychoville’, ‘Calabash’ and two volumes of memoirs, the award-winning ‘Paperboy’ and ‘Film Freak’.

In 2015 he won the CWA Dagger In The Library. His latest books are ’London’s Glory’ and the upcoming ‘Wild Chamber’. His collection ‘Red Gloves’, 25 stories of unease, marked his first 25 years of writing. Recent novels include the comedy-thriller ‘Plastic’, the haunted house chiller ‘Nyctophobia’ and the JG Ballard-esque ‘The Sand Men’.

He has written comedy and drama for BBC radio, features and columns for national press, graphic novels, the play ‘Celebrity’ and the ‘War Of The Worlds’ videogame for Paramount, starring Sir Patrick Stewart. His short story ‘The Master Builder’ became a feature film entitled ‘Through The Eyes Of A Killer’, starring Tippi Hedren. Among his awards are the Edge Hill prize 2008 for ‘Old Devil Moon’, the Last Laugh prize 2009 for ‘The Victoria Vanishes’ and again in 2015 for ‘The Burning Man’.

Christopher has achieved several ridiculous schoolboy fantasies, releasing a terrible Christmas pop single, becoming a male model, writing a stage show, posing as the villain in a Batman graphic novel, running a night club, appearing in the Pan Books of Horror and standing in for James Bond. After living in the USA and France he is now married and lives in London’s King’s Cross and Barcelona.