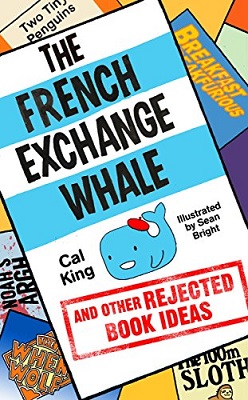 The French Exchange Whale
and Other Rejected Book Ideas

It’s said that everyone has a book inside them. Cal King doesn’t have just one though; he’s bursting with ideas for everything from children’s books to (in his mind) prize-winning novels.

Unfortunately for Cal, his ideas are all a bit silly. However, refusing to be deterred by rejections from publishers and agents (or the laughter of his girlfriend) he managed to secure a meeting at a top publisher and arrived at their London offices with a head full of dreams and a folder full of concepts.

At the end of the meeting (during which the editor seemed to have the most terrible cough) it was gently suggested that Cal compile his pitches into a collection of ‘terrible book ideas’ for the joke book market. Slightly hurt by this suggestion, but driven by a desperate and all-consuming need for approval, he agreed. And here it is . . .

Cal King is a wanna-be-author, well, I suppose seeing as I’m reviewing this book then that ambition has been achieved, but I would hazard a guess this isn’t how he envisaged his first book to be. You see Cal is a man with a very vivid, and what I would call strange or bizarre, imagination.

Over the years he has come up with lots of ideas for books, including: ‘Nun Taken’ – A crime fighting Nun that is kidnapped, ‘This Towel Ain’t Big Enough for the Both of us’ – A story of swimming twins who, now they are older decide that they should stop sharing the same towel, ‘The 100m Sloth’ – A sloth who wants to win the 100m race at the 2020 World Championships. I could go on.

The French Exchange Whale, is a collection of all the ideas that he sent to the publishers that were rejected (I would love to of been in the publisher’s offices when Cal’s letters arrived). Upon reading his outlandish plot summaries I did wonder who I felt more sorry for, Cal receiving rejection after rejection, or the publishers having to read his work – sorry Cal.

I have to say though that with a bit (okay a lot) of tweaking some of his ideas may just work – ‘The Family Tree’ being one of them, if he removed the actual tree from the plot!

Alongside Cal’s ideas are amusing illustrations by Sean Bright, which did heighten the laugh out loud factor. The book is highly amusing (is this what you were aiming for Cal?), but it also lacked the one thing I was hoping to see – the rejection letters. I do wonder if these would be as humorous at the plot ideas.

This book is a fun, short read, and certainly different from anything I have ever read before. It would make a great gift, maybe for Christmas (well, this is what it was intended for).

In all seriousness, it is a great book of wacky ideas that made me giggle, and was fully enjoyable from beginning to end.

Hi there, I’m Cal and I work in digital marketing at a TV broadcaster here in the UK.

I love to write and make things as well as poking my camera where it isn’t wanted.