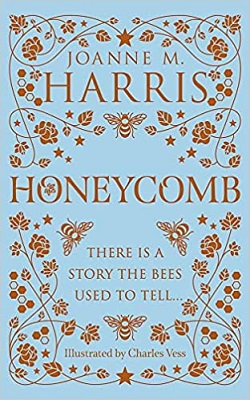 Long ago and far away,
Far away and long ago,
The World was honeycomb, we know,
The Worlds were honeycomb.

The beauty of stories is that you never know where they will take you. Full of dreams and nightmares, Honeycomb is an entrancing mosaic novel of original fairy tales from bestselling author Joanne M. Harris and legendary artist Charles Vess in a collaboration that’s been years in the making. Dark, gripping, and brilliantly imaginative, these magical tales will soon have you in their thrall.

Each original tale is a small piece of the larger picture – a clue or a message, a theme, or a warning – interwoven with the tale of the Lacewing King as he travels the Worlds and encounters a multitude of characters: a toymaker who wants to create the perfect wife; a princess whose heart is won by words, not actions; a tiny dog whose confidence far outweighs his size; and the vengeful Spider Queen, and deadly Harlequin . . .

Turn the page, and be swept up in the adventure.

This is a gorgeous collection of super short (2-5 page) stories that read like a cross between fairy tales and fables, each interconnected to a larger picture. The Lacewing Prince is a selfish and cruel ruler of the fair folk, touching many lives with his behaviour, but as time goes on he starts to face the consequences and mature.

They’re really easy to read and particularly good if you only have a couple of minutes to spend reading at a time, though I will admit that I read the whole book in a couple of settings.

The stories carry a mixture of moral messages and also, if you’re familiar with Joanne Harris’ Twitter presence, some stories that really capture the kinds of personalities you find online and how they affect others (I’m being so diplomatic here, you should be impressed). She’s unapologetic in her criticism of certain characters, without ever directly even criticising them and I love it.

The illustrations in this book are spectacular and I recommend reading the print edition so you can relive the childhood experience that I imagine most lifelong bookworms have, of poring over a book of fairy tales and looking at the pictures when you should be in bed. It’s such a nostalgic feeling with an adult twist, though the stories would be perfectly suitable for kids.

Joanne Harris (MBE) was born in Barnsley in 1964, of a French mother and an English father. She studied Modern and Mediaeval Languages at Cambridge and was a teacher for fifteen years, during which time she published three novels, including Chocolat (1999), which was made into an Oscar-nominated film starring Juliette Binoche.

Since then, she has written 18 more novels, plus novellas, short stories, game scripts, the libretti for two short operas, several screenplays, a musical and three cookbooks. Her books are now published in over 50 countries and have won a number of British and international awards. She is an honorary Fellow of St Catharine’s College, Cambridge, has honorary doctorates in literature from the universities of Sheffield and Huddersfield, and has been a judge for the Whitbread Prize, the Orange Prize, the Desmond Elliott Prize, the Betty Trask Award, the Prima Donna Prize and the Royal Society Winton Prize for Science, as well as for the Fragrance Foundation awards for perfume and perfume journalism (for which she also received an award in 2017).

She is a passionate advocate for authors’ rights, and is currently the Chair of the Society of Authors (SOA), and member of the Board of the Authors’ Licensing and Collecting Society (ALCS).

Her hobbies are listed in Who’s Who as: “mooching, lounging, strutting, strumming, priest-baiting and quiet subversion of the system”, although she also enjoys obfuscation, sleaze, rebellion, witchcraft, armed robbery, tea and biscuits. She is not above bribery and would not necessarily refuse an offer involving perfume, diamonds, or pink champagne. She works from a shed in her garden, plays bass in the band she first joined when she was 16, is currently co-writing a stage musical and lives with her husband in a little wood in Yorkshire.