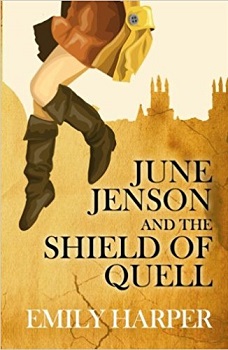 June Jenson, an accomplished Oxford professor, has spent her life trying to get out from under the shadow of her infamous grandfather: a renowned archaeologist accused of stealing a relic during an excavation at Sutton-Hoo.

When a secret alliance recruits June to guard priceless artefacts she realizes that this is her chance to contribute to the history she loves and rid herself of the cloud of suspicion that her family has lived under for so long. But, when the artefact June is commissioned to guard turns out to be the same relic her grandfather was accused of stealing− a relic he has consistently claimed never existed − her carefully laid plans of family redemption are a bit shot.

Now, with the aid of her accused grandfather who suffers from early onset Alzheimer’s, and a chauffeur who’s looking for a scandal to make him famous, June must race to discover the truth of the shield and what really happened at Sutton-Hoo all those years ago.

June Jenson has lived under the shadow of her grandfather for more years than she cares to remember. Accused of plundering a priceless artefact from an excavation at Sutton-Hoo many years ago, June’s grandfather has always maintained his innocence. June, now an Oxford Professor, gets recruited by a secret alliance. They want her to protect treasured artefacts.

It becomes time for June to solve the mystery and clear her grandfather’s name once and for all. The question is, can she? With a small team of people willing to help her, June discovers that not everyone is who they appear to be. Can June work out who to trust and go on to solve the Sutton-Hoo mystery?

I found this to be a gripping mystery novel. It had some wonderful gentle humour sprinkled through it – mainly in the form of June’s grandfather. He is suffering the early onset of Alzheimer’s disease. We find him grumpy and always intent on taking his pants off (trousers, to fellow English readers!) at any given moment which provides us with warm-hearted humour. It could be seen as mocking him and his cruel disease but Emily Harper handles it with tact and care. It’s also a soft introduction to the disease, for any reader who is unfamiliar with it.

Harper has given life to a wonderful array of characters. Each one helps move the story along and keeps us entertained with their antics. Dr Cooke, an old companion of June’s grandfather, was endearing. The sparring of words between these two gentlemen was delightful and had me laughing. They were like an old married couple.

Griffin, the taxi driver, was likeable. I imagined him to look like Q from the more recent James Bond films. Griffin is honest from the start: he is helping June and her grandfather in the hope it will progress his career. By joining forces they each have something to gain. They made a great team and I enjoyed their interactions.

Not all the characters are who they appear to be. Who do you trust? Who is telling the truth? I had faith in one character in particular and I was pleased when I discovered my instincts were spot on. Yet a different character proved me wrong. I was so sure from quite early on that this character wasn’t to be trusted. As the story progressed I found them to be very likeable, and very funny. My initial foreboding had been wrong.

June Jenson and the Shield of Quell is an entertaining page-turner. There’s mystery, suspense, action, adventure – and even a bit of romance. It has it all. It would be a great story to base a feature-length television drama on.

I’m looking forward to reading the next instalment of June Jenson!

Emily Harper has a passion for writing humorous romance stories where the heroine is not your typical damsel in distress. Throughout her novels you will find love, laughter, and the unexpected!

Originally from England, she currently lives in Canada with her wonderful husband, beautiful daughter, mischievous son, and a very naughty dog.