Pardon Me: A Victorian Farce by James Roberts – Book Review

Pardon Me: A Victorian Farce by James Roberts – Book Review 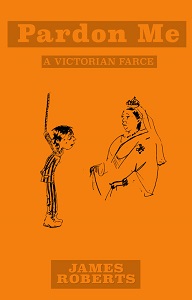 The year is 1896 and following a brief, if lively, spell in the diplomatic corps, Madagan Rùn is being executed for Treason. The prima facie case against him is compelling. Madagan coerced the normally temperate Dr Jameson into raiding the Boer Republic, then tipped off the Boers and pocketed a cheque for 30,000 Krugerand.

Now here’s the pity of it. All his unfathomable schemes have been driven by a selfless devotion to Queen, Country and Empire. Trouble is, to save himself he must perforce lay bare the grievously stained undercarriage of Victorian high-society: starting with fantastical revelations vis-à-vis the making, lending and subsequent mislaying of the world’s first ever celebrity sex celluloid.

No less an august triumvirate than Cecil Rhodes, Joseph Chamberlain and Prince Victor Albert have reason aplenty to pray Madagan takes his secrets with him to the gallows. Sadly for them the florid and faintly familiar Mr Melmoth has just posted a typewriter to the Tower and instructed his chum Maddy to tell the old Queen everything. Pardon Me.

‘Pardon Me’ will appeal to lovers of comic farce and anyone who likes their bedtime reading to transport them to a world where gravity is not so damnably unforgiving and a gentleman can get his glans penis scarified and still go on to enjoy a (brief) career in the Diplomatic Corp.

I will tell you now, I only read the first 40% of Pardon Me before calling it quits.

This book started off well for me; it was funny, verbose and witty. It was a satirical take on the Victorian era, a hapless gentleman by the name of Madagan Rùn is writing a letter to Queen Victoria to explain his predicament while he is held in the Tower, pending his execution for treason.

It was a little difficult to follow at times as the tenses were inconsistent, though it was unclear whether this was deliberate or not.

Though I didn’t reach the end, I know that his tale involves an imaginary panda, a huge amount of innuendo and frankly, a level of racism that had me lost for words.

So around 37% in, I started wondering if this was just the teeniest bit offensive, and by 40% I was convinced that it was.

Once our bumbling protagonist makes it to Johannesburg, he crosses paths with an arms dealer. The author felt that now would be an excellent time to dust off the ol’ African tribesman caricature, complete with spear, fertility statues, cannibalism and horrendous dialogue.

“I snap you like a hurricane snap de baobab tree. I cover you in daga. Den I eat you up. Den I eat all your family up.”

I know it was satire and there is the slimmest chance that there would have been some explanation later in the book that made it acceptable, but I couldn’t stomach another page – to me, there will never be a time or context in which it’s OK to make use of those stereotypes.

I’ve decided to exercise my right to be offended by a book and remove it from my Kindle rather than read it to the bitter end. 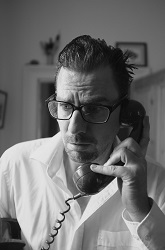 James Roberts is a forty-something indie author and misanthrope who currently resides in the remoter outreaches of the Highlands of Scotland. He states his profession as ‘freelance copywriter’, being far too vain and supercilious to admit to being ‘mostly out of work’.

He has previously found gainful employment as a cocktail waiter, a vendor of cleaning cloths, a lecturer in modern history, a car salesman, a private tutor working with the financially advantaged, a care assistant working with the mentally disadvantaged and a fruiterer’s assistant. Some of these jobs he has been properly qualified for.

The epitome of the hermetic scribbler, James describes the content of Facebook, Twitter and Instagram as “nauseatingly narcissistical dribble” and litters his correspondence with pidgin Latin aphorisms ad adsurdam omne ignotum pro terribili (as he would say), solely to annoy the younger generation.