The Prophecy by Petra Landon – Excerpt 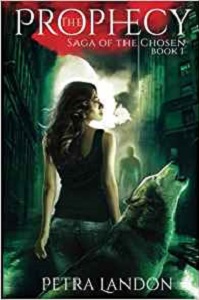 Tasia Armstrong is a very special Chosen. Forced to hide from her brethren, she lives in the shadows. Until the night she makes a fateful decision to assist an injured Shape-shifter. Her cover nearly blown, Tasia finds herself an unwitting pawn in the ongoing skirmish between mysterious mercenaries encroaching on Pack turf and the local Shape-shifter Pack led by a formidable and dangerous Alpha Protector.

Tasia must fight to protect the deadly secrets she guards while grappling to deal with the enigmatic and ruthless Alpha and his fractious Pack of volatile Shifters. When the Pack is asked to investigate a twenty-five year old mystery, Tasia’s special brand of magic proves essential to cracking the riddle. As an unlikely coalition of Chosen start to dig deeper into the past, they begin to realize that grave danger threatens their world. Tasia is slowly drawn deeper into the investigation as a powerful wizard uses an old prophecy to divide the Chosen.

As danger closes in on her, Tasia must decide who to trust. Author’s Note : The Prophecy is the first book of Saga of the Chosen. A tale of fantasy, mystery and adventure with a dose of romance sprinkled in, it is set mostly in contemporary San Francisco. The Rainmaker will be Book Two in this series.

This was the vampire Mistress, the most powerful Undead of this branch of the Clan. The Ancients still called the vampires by their archaic name, Blutsauger, as the Bavarians of old had named their bloodsuckers. They also referred to the Undead collectively as the Clan for the vampires were thought to be the most lineage conscious and clique-ish of all the Chosen.

Unlike the strict hierarchy of a Shifter Pack where a Shifter could advance his overall position in the Pack by his ability and ambition, each vampire’s position in their branch of the Clan was determined at his birth (when he became one of the Undead) and could only be changed by the whim and patronage of his Master or Mistress.

The woman rose slowly from the bed to make her way towards the visitors. Her skin was dead white as if it had not seen the sun for centuries; the only flashes of color on her face were her bright red lipstick and the heavily made up eyes. Her dark hair was put up in an elaborate hairdo and diamonds glittered in her hair, on her neck and fingers. She wore a green velvet gown cut low in the neck with tiny puffed sleeves that showed off her bony shoulders.

“Raoul, what a pleasure” she purred in dulcet tones, holding out her left hand with the palm downwards like an imperious lady of the manor while sipping from the wine glass she held in her right hand. The Alpha made his way unhurriedly towards her and surprised Tasia by clasping the woman’s hands lightly before giving her an old-fashioned bow.

She pouted prettily at his bow as if disappointed at not having her hand kissed, glancing past him to the three who stood a good few paces behind Raoul. “Ooh, you’ve brought company with you” she exclaimed in an exaggerated little girl manner. “The faithful Duncan and the beautiful Hawk.” She blew air kisses in the direction of both the Shifters.

Duncan gave her a courteous nod and Hawk murmured a polite greeting. The gleaming gaze moved on to Tasia with a smile.

“You brought me a present, moj drogi. I love presents.”

The last words were directed at Raoul with a delighted smile. In a flash, the woman moved within touching distance of Tasia to study her with that gleaming cruel smile. Tasia could feel her heart thump loudly in her chest as she sensed both Duncan and Hawk tense up at the woman’s sudden proximity. But the Alpha remained at ease some feet away as if the vampire’s actions had not caught him by surprise.

Franciszka gazed hungrily at the young girl staring at her in bemusement and more than a hint of fear. Her eyes zeroed in on a vein that throbbed gently at the witch’s delicate throat. The vampire’s tongue flicked slowly over her molars as if in anticipation and a drop of blood slid out slowly to rest on her lips. Tasia watched as the woman quickly licked the red drop off her lips. To her horror, she realized that the wine glass in the vampire’s hand held blood rather than the red wine she’d assumed.

Franciszka’s hand snaked out suddenly towards Tasia. Before Tasia could attempt to duck, Duncan caught the Mistress’s wrist in a flash to hold it with an implacable grip. He stared at the vampire without expression and it was Raoul who called out lazily.

Franciszka turned her attention to Raoul, her wrist still captured in Duncan’s massive fist, to make a little moue of disappointment. “You’re no fun at all, Raoul. I won’t touch her if you don’t want me to but how about a quick little lick. No touching, just a taste” she begged charmingly as if she were asking him for a treat.

Tasia stared at the Mistress in dawning horror before turning her attention to the Alpha who looked, for a minute, like he was seriously considering the vampire’s request.

“Sorry, Franciszka. Can’t allow that” he said eventually, not bothering to sound sorry at all.

The vampire wriggled the wrist still captured in Duncan’s meaty hand and he let go. She turned to face Raoul. “But, moj drogi, how can this be? I didn’t know that your taste ran to young innocents. I thought you preferred more sophisticated charms” she chided him, thrusting out her full breasts in their low-cut gown in his direction.

“But how were my Pure Bloods to know that, Raoul? She’s not a Shifter and you’re not exactly known for your love of Spell Casters” she reasoned.

“True” the Alpha acknowledged. “I don’t blame your vampires for not knowing that she’s Pack. Although I am disappointed at them for engaging the Pack in a fight once we let them know that she was under my protection.”

“That was very naughty of them, Raoul, and you can rest assured those responsible will be appropriately punished.” A flush of excitement seemed to bring some color into her face as if the mere idea of the upcoming punishment excited her.

“I’m very happy to hear that” Raoul responded imperturbably. “There is also the matter of your vampires helping non-Pack Shifters to set up a cage.”

“A cage!” Franciszka exclaimed, clearly surprised by this bit of news. “What kind of cage?”

“A special one used against one of my Shifters” he said calmly. A cage reinforced by silver could not have been set up by any Shifter. It made sense for the mercenaries to have used leeches for more than one job.

An avid reader all her life, only recently has Petra allowed her own imagination to run riot. She loves to travel, loves the outdoors and reads everything she can get her hands on, time permitting.

Her taste in books is very eclectic – she tends to like stories with vivid and quirky characters that have elements of fantasy, adventure, romance and mystery interspersed together. A good book for her is one that makes the reader think long after it has been finished and set aside. And one that draws the reader back to it, again and again.

Stories have swirled in her head for years. Sometimes, when the ending of a promising book disappoints her, she imagines a different and more satisfying outcome for herself. To share the characters and tales that have lived in her imagination for so long is a labor of love and a lifelong dream come true for her.