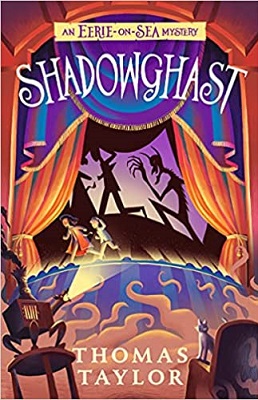 A creepy magician with a shadowy act. A legend that goes back to the dawn of time. Eerie-on-Sea just got stranger. And darker…

A mysterious stage magician has set up in the theatre at the end of the pier, with an act so hypnotic and strange that Herbie Lemon and his friend Violet Parma suspect dark forces are at work. Meanwhile, folk are disappearing from Eerie-on-Sea, and no one knows why. There is an Eerie legend that goes back to the dawn of time, about a creature made of darkness that devours the shadows of the living. But could the Shadowghast really have returned?

Our young protagonist and Lost-and-Founder at the Grand Nautilus Hotel in Eerie-on-Sea, Herbie Lemon is back in the third instalment of his series set in the spooky seaside town. If you are unfamiliar with the series then you need to start at the beginning with ‘Malamander‘ which will explain all about the young lad being washed up on the shore in a crate of lemons and his job at the hotel, plus this is where he meets his best friend Violet.

In the third book, Herbert gets a surprise when a woman, a magician, turns up in Eerie-on-Sea, for the Ghastly Night celebrations that take place once a year at the end of the pier. She states that she is his aunt and that she has come to take him home, but whilst Herbert is sure she is telling the truth, Violet is not. Although she does have more pressing issues as her friend and boss Jenny from the book dispensary has gone missing and with the legend that is the Shadowghast instilled into the resident’s minds, it isn’t long before people begin to believe that the man who steals shadows has returned.

Shadowghast is a fabulous book and brings together all the characters from the previous two stories and adds a few more to the mix. Eerie-on-Sea (originally called Cheerie-on-Sea but the first two letters fell off the sign), will capture the imagination of the reader with its amazing shops, including the book dispensary with its Mermonkey that chooses the right book for you. A talking cat, and a whole host of amazing and unusual residents.

The plot is full of adventure and I love the nod to the 80s in the arcade, including the movie BIG!! This is the perfect book for this time of year with its creepy and slightly dark plot. It is engaging and keeps the reader entertained the whole way through and gives them a thrilling ride as they join Herbert and Violet once again.

Thomas Taylor was born in Norfolk, England in 1973, but grew up in Wales. He attended Norwich Art School in 1991, before going on to specialise in illustration at Anglia University in Cambridge, graduating in 1995. After dabbling in Theatre design he decided to concentrate on children’s books because he prefers the colours.

Since his first illustration job, the cover for Harry Potter and the Philosopher’s Stone (Bloomsbury), Thomas has contributed to and illustrated dozens of books, plus written and illustrated four: George and Sophies Museum Adventure, Orchard; The Loudest Roar, OUP; The Biggest Splash – OUP; and The Noisiest Night, OUP.

Thomas has recently moved from Cambridge to Normandy, France where he lives happily with his beautiful wife Célia and his little son Max. He still illustrates stories for children and loves reading them to his boy.