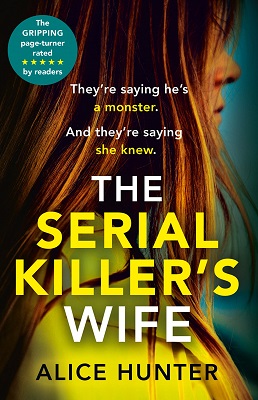 Every marriage has its secrets…

When the police knock on their door one evening, Beth panics. Tom should be back from work by now – what if he’s crashed his car? She fears the worst.

But the worst is beyond imagining.

As the interrogation begins, Beth will find herself questioning everything she believed about her husband.

The Serial Killer’s Wife turned out to be a different book from what I was expecting to read. I expected the book to quite gruesome as the husband picks off his victims one by one whilst his wife may or may not have known. I knew he was going to be arrested early on due to the synopsis but I thought that maybe via a series of flashbacks we would get to relive these moments, the book was far softer in the approach but it was still an amazing read.

Beth lives in a little village with her husband Tom and their young daughter Poppy. She runs the local art cafe and Poppy attends the village nursery. She thought they had the perfect life until one night Tom is late home from work and the police come knocking on her door. She expected the police to tell her there had been an accident and Tom was hurt, not that they wanted to take him in for questioning over the disappearance of his ex-girlfriend Katie.

The police charge him with murder but that isn’t the end of what they charge him with. Beth has to live in this quaint village in which everyone knows her business and they can’t believe she didn’t know her husband was a serial killer.

The book is told from different points of view, although mainly from Beth’s and set in different time periods, – Now, Then, and a few from years ago. It has short chapters and an exciting plot which kept me gripped to the pages. I actually read the book in just two sittings as it was such an easy, fast-paced read.

This is a book you need to go into with an open mind, plus the ending was a real shocker although looking back I had picked up on a few warning signs.

I did wonder as I turned the last page whether this is going to be a standalone novel or if there is to be a follow-up book. It would be amazing to continue the story and delve deeper into the couple’s life. Whichever it is, The Serial Killer’s Wife is a tense, atmospheric read that I enjoyed the whole way through.

After completing a psychology degree, Alice Hunter became an interventions facilitator in a prison. There, she was part of a team offering rehabilitation programmes to men serving sentences for a wide range of offences, often working with prisoners who’d committed serious violent crimes.

Previously, Alice had been a nurse, working in the NHS. She now puts her experiences to good use in fiction. THE SERIAL KILLER’S WIFE draws heavily on her knowledge of psychology and the criminal mind.

What did you think of ‘The Serial Killer’s Wife’? Share your thoughts in the comment section below!