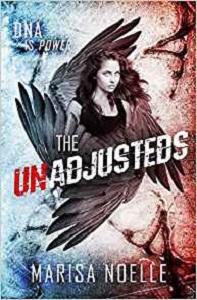 Sixteen-year-old Silver Melody lives in a world where 80% of the population has modified their DNA. Known as the altereds, those people now possess enhancements like wings, tails, and increased strength or intelligence. Although Silver’s parents created the nanite pill used to deliver these genetic modifications, Silver is proud of her unadjusted state.

However, when the president declares all unadjusteds must take a nanite, Silver has no choice but to flee the city with her father and some friends to prevent the extinction of the unadjusteds.

With Silver’s mother in prison for treason, Silver’s father is the unadjusteds’ only hope at finding a cure. But time is running out as Silver’s father is captured by the president’s almost immortal army. Vicious hellhounds are on Silver’s trail, and her only chance to recover her father involves teaming up with a new group of unlikely friends before all humanity is lost.

‘The Unadjusteds’ is a young adult novel from British-based author, Marisa Noelle. It is written in the first person and the present tense and based in a futuristic dystopian America. We follow the story of Silver Melody, a sixteen year old student who rebels against the regime of the evil President Bear.

We’re plunged into this fast-moving story with a hard-hitting opening and we discover a little more, incidentally, as the story unfolds without any great emphasis on plot background, unless this book is a follow up to a previous adventure for Silver?

We discover that Silver’s scientist parents have a social conscience and developed their genetically modified medication to treat birth defects, as well as terminal and chronic illnesses but then we find their work has been hijacked and abused by others. What started as a disease eradication project has been turned into a dangerous dehumanising process to alter or ‘enhance’ the population to further the aims of the president.

I enjoyed some of Silver’s companions’ backstories, positively dripping with pathos as we witness the worst side of human nature where greed and vanity outweighs respect and altruism. As with most YA stories, there is the inevitable self-awakening and dawning of romantic attachments however, these aspects don’t detract from the main plot which revolves around Silver and a group of disparate but like-minded people who attempt to form a resistance movement. Only Silver’s parents can find a restorative cure for the population but can they be rescued? Can Silver avoid capture with a price on her head?

This YA tale has a lot going for it; there is intrigue, betrayal, deception, jealousy, fear, hatred, loyalty, love and comradery; all played out against the backdrop of good versus evil. This tale is, on the whole, less formulaic than many fantasies and I compliment the author on her idea. I have no doubt this book will hit the spot with its target audience. It is an exciting story with the way left open for a sequel. I award four stars.

Marisa Noelle is the writer of MG & YA SFF & mental health novels. The Shadow Keepers was released July 2019, The Unadjusteds coming November 2019 & The Mermaid Chronicles – Secrets of the Deep at the end of 2019.

When she’s not writing or reading or watching movies, she enjoys swimming. In the pool she likes to imagine she could be a mermaid and become part of some of her make-believe words. In the water, she can ignore the real world and focus on the plots of new novels and scenes. She lives in Woking, UK with her husband and three children.