The Writing Life of: Katrina Mountfort

This week on ‘The Writing Life of:‘ I am thrilled to be interviewing author Katrina Mountford. Katrina will be sharing with us detail of her writing life, telling us all about her latest book ‘Forbidden Alliance‘, which was released on 4th September 2015 and answering a few fun questions too. Post contains affiliate links. 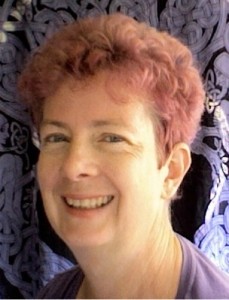 She struggles to define the genre of her novels and describes the Blueprint trilogy as a mix of romance and adventure set in a dystopian future. As well as the trilogy, she has written three other novels with a contemporary setting that are, as yet, unpublished.

Katrina lives in Essex, England, with her husband and two dogs and loves walking, travel and wildlife – a few years ago she achieved her lifetime dream of seeing gorillas in the wild in Rwanda. At the end of a working day she relaxes with a glass of wine, some dark chocolate and a good book.

I remember being at primary school, probably aged about eight or nine. The teacher used to give us pictures cut from magazines to prompt creative writing exercises.

Mine was of a walled garden and for the first time, I completely lost myself in something creative. I wasn’t often happy at primary school but that’s a joyous memory.

When I was eleven, a mad nun who taught chemistry inspired me to become a scientist and I didn’t write again for thirty years but that’s another story … But when I look back over old diaries, it’s surprising how many times I refer to ‘the writing dream’.

Slowly! When I was forty, a close friend died of cancer and I though ‘you can’t put off that dream forever.’

I had a vague idea for a story (which became Future Perfect) and wrote 12,000 words, which were dreadful, more school essay than best-seller. I put it away and thought, ‘At least I tried.’

Five years later, a friend in the US who was also pursuing her writing dream, persuaded me to have another go and this time I took it seriously.

I posted on critique websites, had professional manuscript reviews, attended writing seminars and conferences. Criticism can be painful but it’s the best way to learn.

Too many to list. David Nichols and Jojo Moyes are my current favourites as they create characters that immediately engage the reader.

My strongest early influence was Emily Bronte. Even though I now see Wuthering Heights as flawed, there was something magical about that forbidden love that’s influenced most things I’ve written since.

I don’t have an average day because my day job (freelance medical writing) doesn’t allow for a regular routine.

I can write 8,000 words of a novel on a day with no distractions and on other days I’m lucky if I get a chance to look at a manuscript at all.

No strange habits though I like to have a dog in the room – I have two black Labradors and one likes to sit under the desk, which can make it a little cramped but is comforting!

The one constant in my routine is two hour-long dog walks, and during this time I often get my best plot ideas. 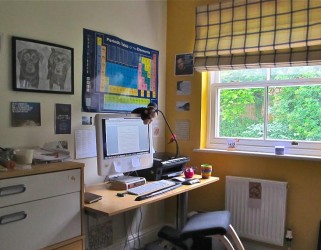 Always computer – I change my mind far too much to write longhand! Though I’m always jotting down ideas in notebooks or on scraps of paper.

I have a strong attachment to Cathy as she’s the first character I created, my favourite character is Suna, Cathy’s biological daughter from the Citidome.

Her story doesn’t happen until book 3, but it was the biggest challenge to write because she is a true Citizen – she has no understanding of human emotions.

I usually have a rough idea where I’m going, but when I’m in the flow it’s as if the characters have a life of their own and they often end up doing something I wasn’t expecting! 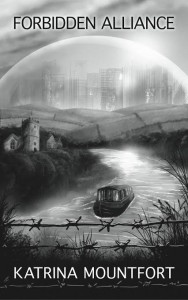 Forbidden Alliance is part of the Blueprint trilogy, which follows the story of a man and a woman over eighteen years.

They begin life as Caia and Mac, young scientists in in a Citidome, in which citizens are kept safe, but highly controlled. Discouraged from ‘subversive thinking’ they can’t even imagine the world beyond the dome.

In this world, looks are everything and both are misfits in a society that prizes the tall, ultra-thin androgyny of BodyPerfects, but relationships are forbidden. Outside is another world, where people live self-sufficient lives in abandoned villages. When Caia and Mac flee the Citidome and become Cathy and Michael, their journeys are far from over.

Around two years. I didn’t know I was going to write it until after I’d finished Future Perfect (which took ten years from idea to publication!).

Future Perfect was intended as a standalone novel but by the end, I’d become so immersed in the future world I’d created, I wanted to stay there longer.

Not exactly, but some days everything I’m writing sounds flat and wooden. On those days I just plough on, knowing that any words on a page are better than nothing and I can improve them later.

If the words really aren’t coming, I’ll go back and edit an earlier section.

In Future Perfect they had different names, Caia and Mac, and these names were harder. I wanted Citidome to be short and abrupt, reflecting the sterile society, and also of no obvious ethnic origin as I wanted to keep the reader guessing as to who controlled the Citidomes.

Ooh, this question is fun! Mac/Michael stands out for his rampant masculinity in an almost androgynous world so it has to be Aiden Turner. And he has to take his shirt off!

As for Caia/Cathy, Tia Carrere would fit the bill as she’s beautiful, feminine and of mixed ethnicity.

Both are meant to be strikingly attractive but don’t know it because they don’t meet the distorted standards of beauty in the Citidomes.

My husband and my fabulous US friend read everything first.

Next are a few close friends, who criticize and proofread. Then there are the friends I’ve met through my writing, some of whom I’ve never met in person, and these are the toughest critics.

It’s important to have a range of beta readers and proofreaders – you won’t please everyone but if you please most of them, you must be doing something right!