Today we have double book delight for you – Two Jeanette Watts’s Books. Wealth & Privilege and Brains & Beauty, as part of the author’s Promotional Post. 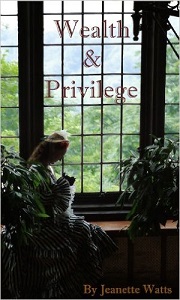 Thomas Baldwin finds himself married to a woman he can’t stand, while head-over heels in love with another woman he can’t have. Talk about bad planning. He is something of a kite, buffeted by circumstances which blow him not only through personal crises, but also through some of the most significant events of the late 1800s, including the railroad riots of 1877, the creation of the Homestead Steel Works, the assassination of President Garfield, and the Johnstown Flood.

Over time, and with the help of his muse, who dances maddeningly just beyond his reach, he takes control of his life, wresting it from the winds attempting to control him.

The troops had achieved their objective. The tracks at the crossing were clear. They stood in formation, at attention, their arms at their sides, guarding the tracks. Their faces were impassive, and not one of them looked down.
The dead and dying lay scattered about the rail yard. There were men, women, even children lying face down in the dirt. A young man in the uniform of the 14th National Guards, one of the Pittsburgh regiments, was crawling away from the scene, his right arm and leg both covered in blood.
From his elevated viewpoint, Thomas could see movements beyond the rail yard, as people half-dragged, half-carried dead and wounded away from the crossing. He could see the shock on people’s faces – he could also feel the anger. It was a burning, deadly anger. These Philadelphians shot down protesters in cold blood. By God, this wasn’t over yet.
Thomas and Regina both sat down on the hard metal deck of the water tower. They sat in silence, too appalled by the scene below to say anything.
“They could have shot over people’s heads, and probably had the same effect without killing anybody,” Regina said eventually.
“Could be,” Thomas answered, only half paying attention. He’d seen movement on the streets below. Yes, indeed: the protesters were returning. He nudged Regina – easy to do, since she’d been leaning against him – and pointed. She looked, and a grim, glad smile reached her lips, if not her eyes.

The eagerly demanded sequel to Wealth and Privilege is a carefully researched historical novel about life and love among the upper class of Pittsburgh. 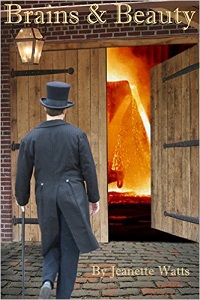 The last thing a proper Victorian lady says – is what she’s really thinking.

Regina Waring seems to have it all. A loving husband, a successful business, and the most expensive wardrobe in town. But nothing is what it appears to be. Her husband is critical and demanding, the business teeters on ruin, even the opulent wardrobe is a clever illusion.

Regina’s life is one long tiptoe through a minefield; one wrong step and her entire life is going to blow up and destroy her. Attempting to hold it all together, she appeases the husband, dresses the part, and never, never says what she is really thinking. That would get in the way of getting things done. And, if there’s one thing Regina did really well, it was getting things done.

Enter Thomas Baldwin. Young and handsome and completely off limits, Regina is smitten at first sight. Then, to her great astonishment, he slowly becomes her best friend. He’s the one person in her life who never lets her down. Torn between her fascination with him and her desire not to ruin a marvelous friendship, she tries to enjoy each moment with him as it comes.

If only that were enough.

There was grunting, and the sound of wood groaning, and then a wet thump as they lifted and threw something. Regina could tell that there was a little more room behind her shoulder blades. There was more grunting and dragging and thumping. Then she heard them both groan.
“What’s going on back there? Have I been cut off at the waist?” she asked. Not being able to see what was wrong, or the progress they were having, was making her anxious.
“The next layer is completely wedged in. We can’t do this without tools,” Isaac told her.
Both men hurried away from her, making her worry for their safety. She had also found their company reassuring. What if neither one of them was able to find her again?
That’s when she saw the flickering orange glow in the distance. “No.”
Yes. It didn’t seem possible – but in the midst of water floating below, and pouring from above, something had caught on fire.
Regina started listing in her head all the accelerants that might be contained in a single drygoods store: tar, pitch, turpentine, kerosene. How many homes used all of them? How many gas lines were ruptured all over the city? How many wood stoves were knocked into them? There was no way this heap would NOT be set on fire.
And here she was, stuck, in the middle of it. No doubt about it, she was about to die in the same town in which she was born. It was a shame, really. She had such high aspirations. 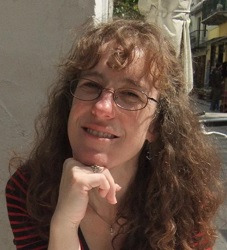 Jeanette Watts couldn’t help but notice that all romances seemed to be set in the American West or the South. A staunch Yankee girl, she asked what is unromantic about the North or the East? After living for four years in Pittsburgh, and falling deeply in love with southwestern Pennsylvania, she found it the perfect location for a love story.

Besides writing, she is also a dance instructor, an inveterate seamstress, the artistic director for several dance companies, an actress, and a history buff. Wealth and Privilege took her 10 years to write, because she felt the research needed to be thorough. Everything from big events and famous people to little details like dog breeds and women’s fashions have been carefully researched.