Today on the blog we welcome author Susan Gander with her Promotional Post for her book ‘We’ve Come to Take You Home’, which was released on 23rd March 2016. Scroll down to read an excerpt from her novel too. 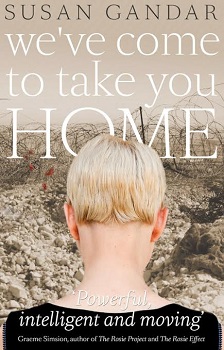 Samantha Foster and Jessica Brown are destined to meet. But one lives in the 20th century, the other in the 21st…

It is April 1916 and thousands of men have left home to fight in the war to end all wars. Jessica Brown’s father is about to be one of these men. A year later, he is still alive, but Jess has to steal to keep her family from starving. And then a telegram arrives – her father has been killed in action.

Four generations later, Sam Foster’s father is admitted to hospital with a suspected brain haemorrhage. A nurse asks if she would like to take her father’s hand. Sam refuses. All she wants is to get out of this place, stuck between the world of the living and the world of the dead, a place with no hope and no future, as quickly as possible.

As Sam’s father’s condition worsens, her dreams become more frequent – and more frightening. She realises that what she is experiencing is not a dream, but someone else’s living nightmare…

We’ve Come to Take You Home is an emotionally-charged story of a friendship forged 100 years apart.

There was a long, drawn-out sigh, followed by the tearing of the air, and the surrounding darkness was split by a flash of white light.
Sam expected to see the lights on the promenade twinkling off into the distance, the wings of the angel statue silhouetted against the moonlit
sky, the cliffs standing sentinel at either end of the town. But what she expected no longer existed.
Stretching out ahead was a vast wasteland; a filthy, oozing sea of mud studded with the blackened stumps of lifeless trees. Craters, filled with slimy water, touched and overlapped all the way to the horizon. Beaten down into this mess were scraps of equipment, helmets, rifles, coils of barbed wire, even a military tank.
A gold ring, embedded in a piece of rock, lay beside her feet. She looked more closely. The piece of rock wasn’t rock but a human finger. As she looked even more closely, the finger connected itself to a hand, a hand attached itself to an arm, a head stuck itself onto a neck, the neck onto a back with two shoulders. The bones jerked and a rat, as big as a cat, tore itself out of the ribcage of a man who used to be somebody’s husband. The sea of mud wasn’t that at all. It was a sea of blood and bones.
There were arms, legs, heads and hands, some still wearing clothes, some still with eyes and hair, layer upon layer of them. And the blood and the bones weren’t all dead. Some were still alive and still suffering. Their cries rose up all around her. A head lifted out of the mud. A pair of blue eyes blinked. And blinked again.
‘Jess…’
A hand reached out towards her.
Jess…’ 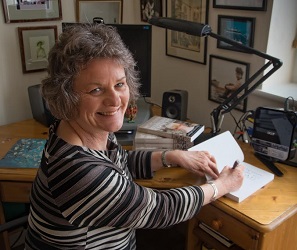 My father, John Box, was a film production designer, working on ‘Lawrence of Arabia’, ‘Dr. Zhivago’, ‘The Great Gatsby’, ‘A Man For All Seasons’ and the musical ‘Oliver’. Our house was always filled with people, usually eccentric, always talented, invariably stroppy, discussing stories. My mother put my father’s four Oscars to good use as toilet roll holders, doorstops and hat stands.

A major chunk of my childhood was spent loitering around on film sets. Who needs an ‘English education’ when you have the polystyrene-coated streets of downtown Moscow, ten miles outside of Madrid, to explore?

But then the years of ‘Who Will Buy My Sweet Red Roses’ came to a rather abrupt end. Reality knocked on the door in the guise of the Metropolitan Line to Shepherds Bush and the BBC. Working in television as a script editor and story consultant, I was part of the creative team responsible for setting up ‘Casualty’. I became known for going after the more ‘difficult’ stories at the same time successfully racking up viewing figures from 7 to 14 million.

I went on to develop various projects for both the BBC and the independent sector. The period I enjoyed most was working with Jack Rosenthal, a wonderful writer, on the series ‘Moving Story’ – ‘That’s a situation, a good situation, but now you need to make it into a story.’

Martin, my husband, was made an offer he couldn’t refuse and we left England to live in Amsterdam. ‘Ik wil een kilo kabeljauw, alstublieft’ will, if all goes well, buy you a piece of cod – I decided to concentrate on my writing rather than my Dutch pronunciation.

My debut novel, ‘We’ve Come to Take You Home’, set in the present and in 1918, a crossover aimed at the adult and young adult women’s popular fiction market, was published on 28th March by Matador.