What’s worse, the hotel’s new owners are turning it into a copy of their Florida properties. Flamingos and all. Cultures are clashing and the hotel’s residents stand in the way of the developers’ plans. The hotel is both their home and their family.

That’s going to make Rory’s job difficult when he arrives to enforce the changes. And Rosie isn’t exactly on his side, even though it’s the chance to finally restart her career. Rory might be charming, but he’s still there to evict her friends.

How can she follow her dreams if it means ending everyone else’s?

New York is where I fell head over heels for a bloke named Chuck. I know: Chuck. But don’t judge him just because he sounds like he should be sipping ice-cream floats at the drive-in or starring in the homecoming football game. Rah rah, sis boom bah, yay, Chuck!
Believe me, I didn’t plan for a Chuck in my life. But that’s how it happens, isn’t it? One minute you’ve got plans for your career and a future that doesn’t involve the inconvenience of being in love, and the next you’re floating around in full dozy-mare mode.
I won’t lie to you. When Chuck walked into our hotel reception one afternoon in late October, it wasn’t love at first sight. It was lust.
Be still, my fluttering nethers.
Talk about unprofessional. I could hardly focus on what he was saying. Something about organising Christmas parties.
‘To be honest, I don’t really know what I’m doing,’ he confided as he leaned against the reception desk. His face was uncomfortably close to mine, but by then I’d lived in New York for eighteen months. I was used to American space invaders. They’re not being rude, just friendly. And Chuck was definitely friendly.
‘I only started my job about a month ago,’ he told me. ‘It’s my first big assignment, so I really can’t f**k it up. Sorry, I mean mess it up.’ His blue (so dark blue) eyes bore into mine. ‘I’m hoping someone here can help me.’
It took all my willpower not to spring over the desk to his aid. Not that I’m at all athletic. I’d probably have torn my dress, climbed awkwardly over and landed face-first at his feet.
Keep him talking, I thought, so that I could keep staring.
He looked quintessentially American, with his square jawline and big straight teeth and air of confidence, even though he’d just confessed to being hopeless at his new job. His brown hair wasn’t too long but also wasn’t too short, wavy and artfully messed up with gel, and his neatly trimmed stubble made me think of lazy Sunday mornings in bed.
See what I mean? Lust.
‘I noticed you on my way back from Starbucks,’ he said.
At first, I thought he meant he’d noticed me. That made me glance in the big mirror on the pillar behind him, where I could just see my reflection from where I was standing. At five-foot four, I was boob-height behind the desk in the gunmetal-grey fitted dress uniform all the front-desk staff had to wear. My wavy dark-red hair was as neat as it ever got. I flashed myself a reflected smile just to check my teeth. Of course, I couldn’t see any detail from where I stood. Only my big horsy mouth. Mum says giant teeth make my face interesting. I think I look a bit like one of the Muppets.
‘Do you have the space for a big party?’ he said. ‘For around four hundred people?’
He didn’t mean he’d noticed me; only the hotel.

Lill raises her tiny hands with a showbiz flourish that catches everyone’s attention. Lill is nothing if not an attention-catcher. Her platinum bob shines out from beneath her favourite black top hat, and she looks every inch the circus ringmaster with her moth-eaten red tailcoat over her usual thigh-skimming miniskirt and white go-go boots.
This wouldn’t look at all unusual if she wasn’t pushing seventy.
‘Happy anniversary to you, happy anniversary to you, happy anniversary, dear Rosie, happy anniversary to you!’
Lill’s voice soars clear and strong above everyone else’s and the Colonel calls me Rose Dear. That man hates a nickname.
They’re all bunched together in our hotel’s decrepit bar, directly under the lurid green banner we used last year when the Colonel’s biopsy came back benign. At his age, that kind of thing deserves celebrating. I was the one who tore it taking it down, so it reads CON RATULATIONS. Story of my life, really.
They couldn’t be prouder of their surprise, though. Even the dog looks smug.
It’s an ambush, though I suppose I’ve been half expecting it ever since Lill let slip that they knew the date was coming up.
Three years back in Scarborough. Who’d have thought it? 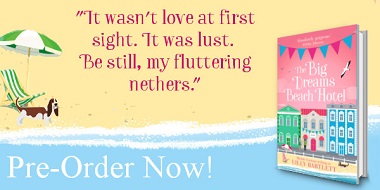 You’re warmly invited to the Wedding of the Century with all your favourite friends. It’s the most vintage fun you’ll have this year!

To WIN a personally inscribed paperback of this gorgeous book, simply sign up here: http://eepurl.com/b96-Yz

Winners will be randomly selected and notified on August 18th via the email used to sign up. Good Luck.

Michele writes books with heart and humour, full of best friends, girl power and, of course, love and romance. Call them beach books or summer reads, chick lit or romcom… readers and reviewers call them “feel good”, “relatable” and “thought-provoking”.

She is both a Sunday Times and a USA Today bestselling author, raised in the US and living in London. She is very fond of naps, ice cream and Richard Curtis films but objects to spiders and the word “portion”.

I spend way too much time on Twitter and Facebook when I should be writing, so please come say hello.