Would I shock you if I told you that the first item purchase on Amazon.com was a book? – I doubt it, as Amazon was originally set up as an online bookstore. But did you know that that first book was purchase exactly twenty years ago today?

What was this book I hear you cry – On the 3rd April 1995, Mr John Wainwright, bought, ‘Fluid Concepts and Creative Analogies: Computer Models of the Fundamental Mechanisms of Thought‘, written by Douglas R. Hofstadter. A little less exciting than you thought.

Mr Wainwright had been given a Beta invite to a fledgling company and hence bought the book three months before Amazon, ‘officially’ became a business.

Amazon have since named one of their buildings in South Lake Union the ‘Wainwright‘ building, after their first customer, with a name-plaque in honour of Mr Wainwright.

Fact – It is noted on many sites that the purchase date was 5th July 1995, as that is the date that Amazon first opened it’s site to the public, they are wrong and the plaque below can prove it. 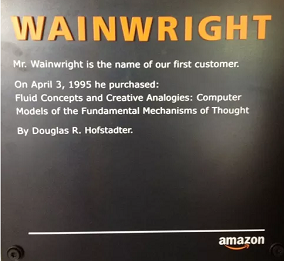