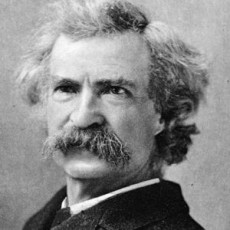 Two weeks exactly before Mark’s premature birth, on the 16th November, Halley’s Comet passed the earth for the first time since 1759.

In Mark’s autobiography published in 1909, he made a statement predicting his own death.

I came in with Halley’s Comet in 1835. It is coming again next year, and I expect to go out with it. It will be the greatest disappointment of my life if I don’t go out with Halley’s Comet. The Almighty has said, no doubt: Now here are these two unaccountable freaks; they came in together, they must go out together.

On the 20th April 1910, Halley’s Comet passed the earth again for the first time since Mark had been born. The next day he died of a heart attack.

It wasn’t his only prediction though. In 1958 Mark had a dream so vivid that he had to get up and go for a walk to clear his head and prove to himself that it was just a dream.

He dreamt that his brother Henry’s body was lying in a metal casket, rested on two chairs in his sister’s sitting room. On Henry’s chest lay a bouquet of white flowers with a single red rose in the centre.

A month later on the 21st June 1858, Henry was killed in an explosion on a steamboat. On visiting his brother’s body, the room was exactly as he had dreamt apart from the flowers. Whilst standing over his brothers body a woman placed a bouquet on Henry’s chest, white with a single red rose.

Mark believe so much in his psychic ability that he joined ‘The Society for Psychical Research‘ (SPR), a non for profit organisation in the UK.

Mark also claimed that when he received letters he knew before opening them what the letters were about.