The Girl in the Photograph by Kirsty Ferry – Book Promo

The Girl in the Photograph by Kirsty Ferry – Extract

Today on the blog we welcome author Kirsty Ferry who is sharing with us an extract from her new book, ‘The Girl in the Photograph‘, book three in her Rossetti Mysteries series. 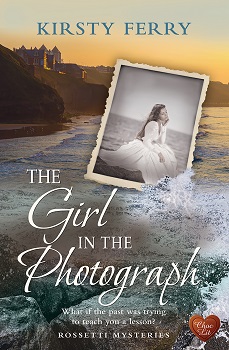 What if the past was trying to teach you a lesson?

Staying alone in the shadow of an abandoned manor house in Yorkshire would be madness to some, but art enthusiast Lissy de Luca can’t wait. Lissy has her reasons for seeking isolation, and she wants to study the Staithes Group – an artists’ commune active at the turn of the twentieth century.

Lissy is fascinated by the imposing Sea Scarr Hall – but the deeper she delves, the stranger things get. A lonely figure patrols the cove at night, whilst a hidden painting leads to a chilling realisation. And then there’s the photograph of the girl; so beautiful she could be a mermaid … and so familiar.

As Lissy further immerses herself, she comes to an eerie conclusion: The occupants of Sea Scarr Hall are long gone, but they have a message for her – and they’re going to make sure she gets it.

Julian MacDonald Cooper watched the woman with the long, dark plait race lightly across the sand and strike out to sea. She was indeed a pleasure to behold and his intuition told him that she would make an excellent model and would be just as much of a pleasure to work with.
He wasn’t sure who she was. He had just left the Dower House for a walk in the cove after a late lunch and he had come across this vision as he rounded the path down onto the beach. He understood it to be a private beach, so he wondered if she was a member of the Scarsdale household or a friend of theirs they had graced with access to the cove.
But he was determined to find out. He strode onto the beach feeling the sand between his toes. He never bothered with shoes or formality when he came down here. Formality was for working and impressing clients. Bare feet and an open-necked shirt would do him very well for the beach. He ran a hand through his longer-than-generally-acceptable dark hair and smiled to himself as he remembered the idea he’d had earlier today about finding a barber in Staithes.
That had never happened, had it?
Well, there was always tomorrow.
Julian had heard a lot about Staithes and the artists’ colony that had sprung up about ten years ago. He feared their days were numbered though; their 1905 exhibition had been subsumed into the Yorkshire Union of Artists’ work, and he had heard other plans were afoot to hold an exhibition in August – which would clash terribly with the Summer Exhibition at the Royal Academy in London. And the art aficionados would be down in the capital along with the wealthy patrons, not up here in a little fishing village on the north-east coast of England.
So that was why he had come down to Yorkshire from Edinburgh. Firstly, to observe how things were now, and secondly, to record Staithes and its colony for posterity in his favourite medium – photography. He already had a dealer lined up in North Yorkshire to buy and sell his photographs.
And that woman, who he now realised was swimming over to some rocks with the clear intention of climbing onto them, was just begging to be used as a model in some shape or form. But first, he conceded, he would actually have to speak to her.

Kirsty Ferry is from the North East of England and lives there with her husband and son. She won the English Heritage/Belsay Hall National Creative Writing competition in 2009 and has had articles and short stories published in Peoples Friend, The Weekly News, It’s Fate, Vintage Script, Ghost Voices and First Edition. Her work also appears in several anthologies, incorporating such diverse themes as vampires, crime, angels and more.

Kirsty loves writing ghostly mysteries and interweaving fact and fiction. The research is almost as much fun as writing the book itself, and if she can add a wonderful setting and a dollop of history, that’s even better.

Her day job involves sharing a building with an eclectic collection of ghosts, which can often prove rather interesting.