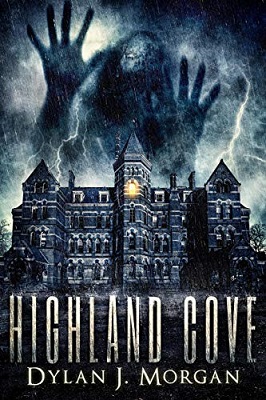 Highland Cove Sanatorium sits abandoned on a desolate island one mile off the Scottish mainland. It’s a dark, foreboding place, filled with nightmares. Even darker are the asylum’s secrets: a history of disease and mental illness, macabre experiments and murder.

The tales of ghostly appearances are said to be more fact than fiction, but no one has ever documented the phenomenon. Codie Jackson aims to change all that. Arriving from London with his small independent film crew, they plan to make a documentary that will forever change their lives.

But when one of the crew disappears, things begin to spiral out of control. A storm closes in to ravage the island, and in the darkness Highland Cove’s true horrors are revealed. Now lost within the institution’s labyrinthine corridors, Codie and his team realize that their nightmare is only just beginning.

We all like something familiar and that is exactly what Dylan J Morgan has written in Highland Cove. Four young men and a young lady spend a weekend in a long abandoned asylum on a remote island with no realistic means of escape and no means of contacting the outside world. They are there to search for ghosts and make a documentary. The author has definitely used a tried and tested setting.

Morgan has some good writing skills. He can write descriptively and he does his best to instil some fear into the reader with his eerie setting and mysterious events but if you’ve ever read a ghost story or watched a ghost movie then you will have heard most of it before. At times I wondered if Highland Cove was intended to be a parody but there is no glimmer of humour.

I sense that he is writing for a young and international audience because there are some words and terms that scream “American” to me as a UK resident. Examples are row boat, surgery room and sneakers. I also struggled to believe that the elderly Scottish seaman sitting alone in the corner of the pub would be drinking Bourbon.

There are a couple of mildly interesting tales about the former residents of the haunted asylum but I found the general storyline so bland for the first 70% of the book that I fear only the most determined or inexperienced readers will persevere. From that point the real action of the book kicks in with some violence that I found excessive and unpleasant. Towards the end there were a few unexpected twists but nothing memorable enough to justify the drudge of the majority of the book.

I can see from Goodreads that Dylan J Morgan has published several novels with generally good reviews so he clearly has a fan base. If this is typical of his work then hopefully they will enjoy this but my personal feeling is that I cannot recommend Highland Cove and I can only award it with two stars.

Now living and working in Norway, Dylan J. Morgan was born in New Zealand and raised in the United Kingdom. He writes during those rare quiet moments amid a hectic family life: after dark, with limited sustenance, and when his creative essence is plagued the most by tormented visions.

If you’re searching for that light at the end of the tunnel then stop looking—you won’t find it here.