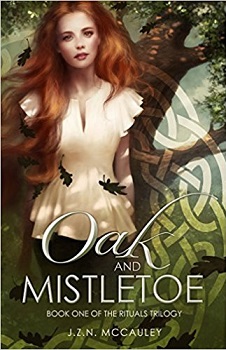 Oak and Mistletoe
The Rituals Trilogy Book One

A Druid Curse, A Prophesied Love, A Consuming Vengeance… Catherine Green, along with her twin sister and older brother, travels to Ireland on a college graduation trip. Her vacation takes a permanent turn when she lands her dream job at an art and history museum on her beloved Emerald Isle.

She meets a handsome stranger named Bowen, an expert of sorts on local ancient studies. Though their first meetings are turbulent at best, Catherine finds herself drawn to him. Unaware that she is the key to breaking a hidden curse, Catherine unleashes the evil madman Conall and his druid followers, imprisoned since ancient times.

Tragedy and loss ensue, sprouting within Catherine the deep seeds of rage that thrust her onto the damaging path of vengeance. Confused by the enigma that is Bowen, his mixed signals, and her own feelings, she is swept away with him on an unexpected journey surrounded by myth and long-forgotten knowledge.

In order to stop the evil plans of Conall and his reunified army, Catherine must entwine her fate with peril. Her survival is trivial to her as long as Conall dies. She’ll do whatever it takes.

A story about a young girl who is the reason a spell meant to keep evil caged is broken. Being the only one who can cast it again Catherine embarks on a journey filled with Druids, wee-folk and Bowen the man who is there to help her with a few secrets of his own.

As much as I wanted to love this book I just couldn’t. The biggest problem was that the POV’s switched every two to three lines sometimes pages with no warning. I couldn’t figure out when Catherine, Bowen or Danny POV was.

I also couldn’t relate to the characters. Rather than feeling what they were and experiencing it with them, I was told, making it impossible to completely immerse myself into the book. The relationship between Catherine and Bowen made no sense, I couldn’t ‘feel’ the connection.

The plot itself had some very good elements and was planned well, but the way it was written didn’t take the story to its fullest potential.

I felt as if the author needed to take the time to build the characters, giving the reader time to understand and get to know the them better. The story would have been a lot smoother and easier to follow had this happened.

J.Z.N. McCauley resides in lovely New England, where she loves wearing jackets and boots in the unpredictable weather there. She is a wife and mother who enjoys life to the fullest. Also, being a nerd across many genres is something she expresses openly.

McCauley spends most of her “free” time writing nowadays, putting down each new fantasy story that comes to mind. She is inspired by and loves archeology, mythology, folklore and fairy tales, history, music and many other forms of art as well. Always having a variety of interests and talents, she could never pick just one. (Singing and drawing to mention a couple.)

Funny quirk number one: When the chance pops up to travel to any of her favorite places, she takes way too many pictures. Number two: She hates her handwriting and often can’t read her own handwritten notes.

She writes a mix of sci-fi/fantasy, historical fiction, and contemporary (sometimes all in one story) in New Adult and Young Adult categories. Currently, she is working on multiple projects.