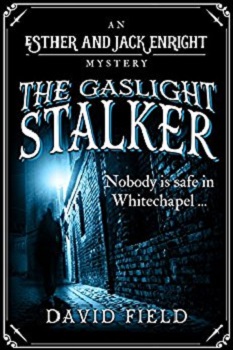 Jack the Ripper is stalking the streets of London. Can anyone stop the serial killer before more women are murdered?

Whitechapel is full of the noise of August Bank Holiday celebrations. Everyone is in high spirits until a woman – Martha Turner – is discovered brutally murdered.

Her friend, Esther, a lowly seamstress turned female sleuth, is determined to find the killer. A young police officer, Jack Enright, takes the lead on the case, and he and Esther soon embark on a professional – and personal – relationship.

When another murder is committed and whispers of a slasher calling himself Jack the Ripper start flowing through the London streets, the search becomes even more desperate.

The police are on the wrong track and the young couple take matters into their own hands, and soon find themselves navigating through London’s dark underbelly.

Can they find the murderer before he kills again? Will anyone listen to their suspicions? Or will this dark presence continue to haunt Whitechapel…?

After reading a review for this book I headed to NetGalley to see if it was available to request. Luckily it was and I quickly added it to my TBR list. You see I have a thing for Victorian England era – which some people might be surprised with seen as I’ve mentioned numerous times how I’m not a big historical fiction lover. The Victorian era though just intrigues me and anything to do with Jack the Ripper intrigues me even more.

In The Gaslight Stalker, we meet seamstress Esther Jacobs back in Whitechapel, London 1888. Now for anyone who knows anything about this period in time, you will know it is when the worlds most infamous serial killer was roaming the streets of London, killing women.

Esther has been sent to the local pub to ask her neighbour Martha Turner/Tabram to come home. However, the woman is in desperate need of a few bob and tells Esther to go home and that she will follow shortly. The next day Martha’s body is discovered. She had been stabbed to death.

Esther is asked to attend the local hearing about the case and give evidence as to her last encounter with the deceased woman. Also at this hearing is local constable Jack Enright. Over the course of the next few weeks the two strike up a romantic relationship. With more women meeting a grizzly death, Esther helps Jack try to discover who this elusive ‘Jack the Ripper’ as he has dubbed himself, is.

David Field has blended fact and fiction to do with the Jack the Ripper case to create a wonderful, engaging novel that I fully enjoyed. The setting was very visual and took me back to the late 19th century. The characters were a delight to get to know. The book followed two paths, that of the investigation into the serial killer and the relationship between Jack and Esther. With both the main characters crossing over into both sections.

The book perked my interest from the opening chapter and held it the whole way through. My only one little niggle was that sometimes the relationship between the young couple felt a little overdone, but that didn’t take away my enjoyment.

If you love Victorian era or mystery/crime books with a twist, then this is definitely worthy of a read.

David was born in post-war Nottingham, and educated at Nottingham High School. After obtaining a Law degree he became a career-long criminal law practitioner and academic, emigrating in 1989 to Australia, where he still lives.

Combining his two great loves of History and the English language he began writing historical novels as an escape from the realities of life in the criminal law, but did not begin to publish them until close to fulltime retirement, when digital publishing offered a viable alternative to literary agencies, print publishers and rejection slips.

Now blessed with all the time in the world, his former hobby has become a fulltime occupation as he enjoys life in rural New South Wales with his wife, sons and grandchildren to keep him firmly grounded in the reality of the contemporary world.