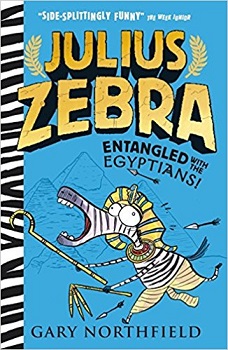 Julius Zebra
Entangled with the Egyptians!

After being shipwrecked on the shores of Egypt and mistaken for a Horse God, Julius can’t believe his luck! Soon he and his bedraggled friends will be living it up in the city of Alexandria; preened and pampered like gods. Then a fancy boat procession will take them down the River Nile to Giza where, of course, a lavish party will be thrown in Julius’s honour – as well as getting the obligatory tour of the Pyramids.

BUT it is this very tour that seems to signal the end to their glorious fortunes in Egypt. On a visit to the Tomb of Cleopatra, Felix is unable to resist a rather lovely looking treasure for his rock collection… He pockets the jewel and immediately a curse falls upon the group.

If you are not familiar with the series, the books are about a Zebra called Julius and his group of animal friends, including a Warthog, Crocodile, Antelope, lion, Mouse, etc. All of them have no social skill, and tend to find themselves in strange and often dangerous situations, set in historical times.

Just like with the first two books, this book is hilarious. It will have older children laughing out loud. The plot is often quite silly, but amongst the amusement there is a story that is not only fascinating and totally addictive, it also contains lots of factual information. The good thing about the way the factual information has been spread throughout the plot is that children won’t even realise that they are subconsciously taking the information in.

“You Royal Majesty may sit here under this silk canopy, if it pleases you.” “Ooh, very snug!” said Julius, plumping himself among the big cushions. “And your friends,” continued the captain, “can sit under the poop.” (Illustration – Brutus, Julius’s brother states he isn’t sitting under no poop) Cornelius pulled Brutus under the small golden canopy at the back. “It’s not THAT sort of poop, you fool!” he chided. “It’s just another word for the roof of a cabin!”

As well as the facts within the story, at the back there is a glossary and an educational section, such as, the hieroglyphics alphabet with which Gary has asked the children to write their name using the drawings.

To complement the story the book is filled with black and white illustrations too. Some are full page, others are dotted around the text, most have speech bubbles and are part of the story.

If you are looking for something that will keep a child engaged and interested in a book, then I highly recommend this whole series. Or, if like me you love slapstick humour and would love to read something that is going to make you giggle, then I also recommend you pick this book up too.