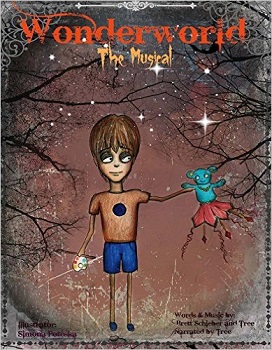 Wonderworld: The Musical is a gothic fairytale about Max, a lonely and confused boy who struggles with distinguishing reality from fiction.

An outcast, he is picked on in school and his only solace is found in his art (his “Wonderworld”). At his lowest moments, his creations come to life to sing to him. Can his art save him?

On seeing that this was a children’s book (all children should read I believe), with an accompanying set of visuals set to songs (music is my passion), and that its aim is to uncover whether art can be a help for well being (yes, yes it can!) I could not raise my hand fast enough to grab a copy and settle in.

So on a gloomy afternoon I sat down with my mum to watch Wonderworld: The Musical. Described as a gothic fairytale, it’s about a lonely and confused boy, bullied at school, and finding refuge in the space between reality and fiction. When his struggles feel overwhelming, his art comes to life, and sings to him.

Speaking about the inner wounds and the importance of dancing to your own desire, it feels like a worthy cause. There’s a few inconsistencies, but generally the idea is sound. I like that his art and pencils come to life and save him, and that creativity is about what you feel, not doing things right. You can choose to live in a bright and colourful world. Who wouldn’t want to explore ‘Wonderworld – a place without trends, full of imaginary friends…fun, filled with adventure and sun.’

As is the way with musicals, viewers can sing along to, and the words are broadcast on screen. So your young children can chime out lovely little verses about the dark and dreary world inside (‘don’t you see the eyes? Burning many holes into me. How can I do my math when wolves get ready to attack?’) as well as brighter parts (we can choose a state of mind that is kind).

I do believe that it is important for young people to talk about their emotions and feel comfortable communicating when they feel unhappy. But would be uncomfortable about putting a book in their hands or film in front of them where rhyming couplets such as ‘if wolves eat my head…I might as well be dead’ ‘I want to escape my miserable fate, but the wolves start to appear’ and ‘what is there for me in my bleak reality?’ I know it’s gothic, and a hallmark of gothic fiction is the disquieting and disturbing nature of it, but I fear that this could reinforce issues, rather than resolve them.

Fearing I was being narrow minded, I shared it with others – even someone who had a bedroom painted in black for a decade, had lullabies of death metal, and fell asleep under posters of a similar nature had to stop after 10 minutes due to it being too dark.

Words and art are very powerful; and this applies to the book and musical in question. I hope that Brett and his friends carry on creating innovative work – but also consider their target audience and their potential vulnerabilities in the process. 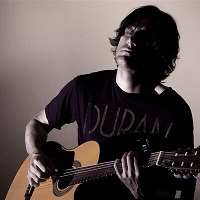 Brett Schieber is a singer/songwriter. His music is haunting and hopeful, with bursts of occasional melancholy, much like the man himself. You’d be wise to become acquainted.